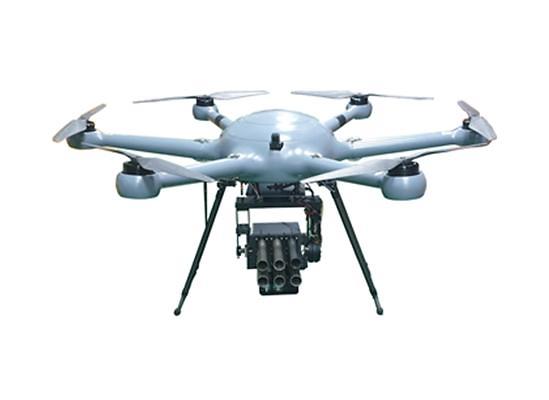 
SEOUL -- South Korea's military will test an attack drone capable of remote control shooting that uses an optical thermal imaging camera and laser, allowing soldiers to directly aim at targets within two kilometers and fire six 40mm grenades that use the explosive power of gunpowder and debris embedded in each shell.

The Defense Acquisition Program Administration (DAPA), a state arms procurement agency controlled by the defense ministry, said it has signed a deal with Korea CNO Tech to purchase and demonstrate an attack drone in the first half of 2023 through an experimental rapid acquisition program that is designed to save development costs and time by adopting technologies developed in the private sector and modifying them for military use.

The drone is equipped with an optical thermal imaging camera and a laser-based distance measuring device as well as other devices to maintain a constant posture for stable shooting. Army soldiers can fire six consecutive shots, one per two seconds.

The military has used the experimental rapid acquisition program to introduce various attack and surveillance unmanned aerial vehicles and drones. "We hope that this pilot project will contribute to revitalizing South Korea's drone industry and increasing military power," Won Ho-joon, a senior DAPA official, said in a statement on August 3.

DAPA will also test a modularized drone developed by Preneu, an automated aviation device producer, for use by airforce and navy units. It would be an easy-to-carry drone weighing less than 1.95 kilograms and can carry out surveillance and reconnaissance missions.

Modularized drones are designed to equip or remove modular equipment such as optical and thermal imaging cameras, speakers, searchlight, and laser distance measuring devices, DAPA said, adding that a modularized drone is equipped with a miniaturized all-in-one communication module and a flight controller capable of sending control commands from radio controllers and motor-driven signals through electronic speed control.