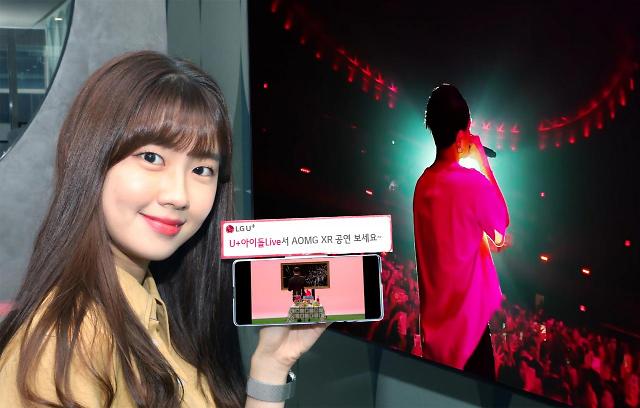 SEOUL -- A South Korean hip-hop label will hold a special non-face-to-face extended reality (XR) concert that would allow fans to enjoy artists' realistic performances as if they were in virtual worlds like scenes in movies with technology support from LG Uplus, a mobile carrier that leads an international 5G XR alliance.

XR encompasses a wide spectrum of hardware and software that enable content creation for virtual reality, mixed reality and cinematic reality. Users can generate new forms of reality by bringing digital objects into the physical world and bringing physical world objects into the digital world. XR technologies have applications in almost every industry.

AOMG founded by Jay Park, a Korean-American rapper and singer, will cooperate with LG Uplus (LGU+) to jointly hold the XR concert on August 28 and broadcast live performances exclusively on the mobile carrier's media platform, U+ Idol Live.

The two-hour event titled "AOMG ONLINE CONCERT: Above Ordinary 2021" will add augmented reality (AR) technology to the stage. AR is a computer graphic technique that synthesizes virtual objects into an environment that actually exists, making them look like real objects that exist in the original environment.

"I hope that the fans' thirst for the stage can be relieved a little by a virtual realistic concert prepared by both companies in the midst of social distancing," LGU+'s XR service head Choi Yoon-ho said in a statement on August 4. Tickets can be purchased from August 5. U+ Idol Live will broadcast live performances alone.

Park has established his hip-hop label to provide more opportunities for talented artists who were not recognized by the public yet. He has recruited artists including Simon D and Loco and signed a contract with American hip hop musician Jay-Z’s label Roc Nation in 2017. Music critic Kim Yoon-ha praised Park as a versatile musician talented in all aspects including singing and dance capabilities. Park's single “Mommae” has garnered over 90 million views on YouTube since its release in 2015.

The hip hop concert comes amid a deep slump in South Korea's performing arts industry. Almost all offline performances have been canceled due to a COVID-19 pandemic. Only a small number of popular artists have earned income through online concerts while many other artists remain inactive or had to seek new ways to make a living.