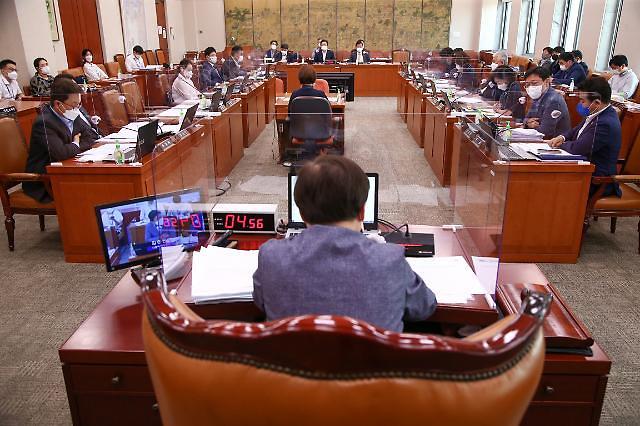 SEOUL -- A bill pushed by the ruling party of President Moon Jae-in to impose greater punitive damages on media companies for malicious false reporting or fake news sparked a strong backlash from South Korea's media organizations, which condemned it as unconstitutional. A campaign has been launched to obtain signatures from journalists.

Six major media organizations joined hands to criticize the ruling Democratic Party (DP) for pressing ahead with a revision to the Media Arbitration Act to impose punitive damages up to five times the claimed damages on media companies for fake news. The DP is poised to railroad the revision through a plenary session of the National Assembly in August.

In a resolution, the media organizations urged the ruling camp to withdraw the bill, stop referring it to the National Assembly's committee and plenary session, listen to constitutional scholars and provide a case for legislation They also want Moon as well as ruling and opposition party candidates running for a presidential election in March 2022 to state their positions on the revised bill

An online signature campaign is under way, with about 1,800 people setting their names as of August 11. The bill passed the subcommittee of the National Assembly's Culture, Sports and Tourism Committee on July 27. The committee held a general meeting on August 10 to discuss the bill for about five hours, but failed to reach a conclusion and adjourned.

The revision can impose punitive damages up to five times the amount of damage caused by false reports and contains a clause that sets a lower limit on the amount of compensation to about one-thousandth of sales by a media organ. In addition, it should be published in the same amount and size as the original report when a corrected report is made. The revision allows a claim to block internet articles from reading.

Cases of punitive damages on media reports have not been found in major foreign countries, and constitutional scholars believe that the amendment violates the constitutional principle of prohibiting excesses, the resolution said, pointing to concerns especially about putting the lower limit on the amount of damage compensation.

"It is hard to believe that a democratic government has come up with the idea of a democratic government to impose punitive punishment on the media based on the vague yardstick of malicious fake news," the resolution said, blasting the government for trying to conduct preliminary censorship. The resolution raised concerns that the subject of judgment may abuse the amended law to define critical articles as "malicious reports."