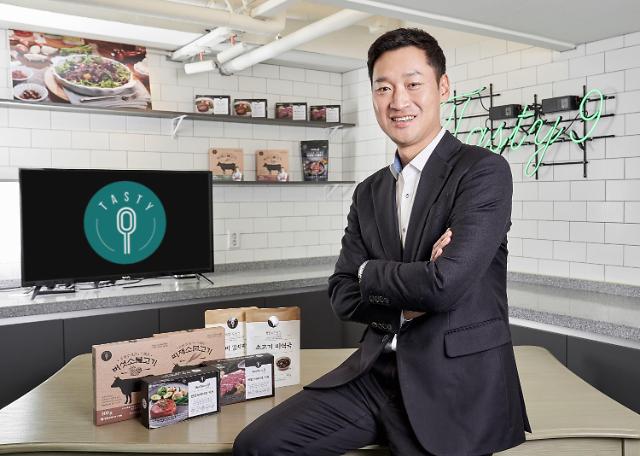 SEOUL -- TASTY9, an online food marketplace that provides food delivery services, is a great beneficiary of South Korea's boom in the market for home meal replacement products, also known as ready-to-cook meal kits, which only require the simple process of heating on a stove or microwave oven and gained popularity due to a COVID-19 pandemic and a growing number of single-person households.

Buoyed by dramatic growth that began in early 2020 with the advent of COVID-19, TASTY9 CEO Hong Ju-yeol unveiled an ambitious goal of becoming a global food company like Nestle and Heinz, starting with the planned establishment of its first overseas subsidiary in Indonesia. He presented a strategy to use local infrastructure instead of building factories that would cost a lot.

"Having large-scale production facilities is like taking a huge risk. There are many factories at home and abroad, and it is competitive to use them," Hong said in an interview with Aju Business Daily. When the COVID-19 pandemic calms down, the first overseas subsidiary will be set up in Indonesia to release Korean and Indonesian food in the form of home meal replacement (HMR) through an original equipment manufacturing (OEM) contract with local factories.

Meal kits or heat-and-eat meal packages including ingredients and sauces became popular in South Korea in 2020 when people chose to cook at home instead of visiting crowded places such as restaurants and bars to avoid COVID-19 infection. Single-person households prefer to cook HMR products because they are affordable and take only a few minutes to prepare. Customized recipes using table sauces and HMR products to create unique meals are widely shared via social media.

According to the Ministry of Agriculture, Food and Rural Affairs, South Korea's HMR market was estimated at five trillion won ($4.3 billion) in 2020. Hong adopted OEM mass production after producing a small amount of direct production by planning HMR that fits the trend. He has established a business model that directly manages planning, production and distribution to reduce inventory and production costs while supplying products at low prices by omitting the process of intermediate distribution.

"With Indonesia at the forefront, we will establish local subsidiaries in 30 countries to become a global food company such as Nestle and Heinz," Hong said, adding Tasty9 is not a traditional food company with factories but creates brands, plans products, and incubate. A decision can be made on whether to grow products based on market responses after small-scale initial production.

"In large companies, it usually takes eight months to a year to release a product, while Tasty9 takes three weeks from product planning to production and distribution," Hong said, showing confidence over the success of Tasty9 which boosted sales from 7.3 billion won in 2019 to 24 billion won in 2020. This year's sales target was set at 100 billion won.

Hong established his company in 2014 after realizing that making money is a brand. However, he had to endure a time of hardships for three years until he hosted a one-day promotion event at Costco, a chain of big-box retail stores, that created an opportunity to grow and open contracts with department stores, home shopping and online malls.

Currently, Hong's company is selling about 350 kinds of HMR products through department stores, marts, and online channels. Along with non-face-to-face channels such as online home shopping, Hong has expanded offline stores to 27 that offer delivery services in the Seoul metropolitan area.

Tasty9 plans to increase the number of offline stores to 200 by the end of 2022 that would be used as places where consumers can experience before ordering products through delivery or online regularly. "We will replace each household's kitchen by setting up and delivering the diet that consumers want. We will apply such models when entering overseas markets."