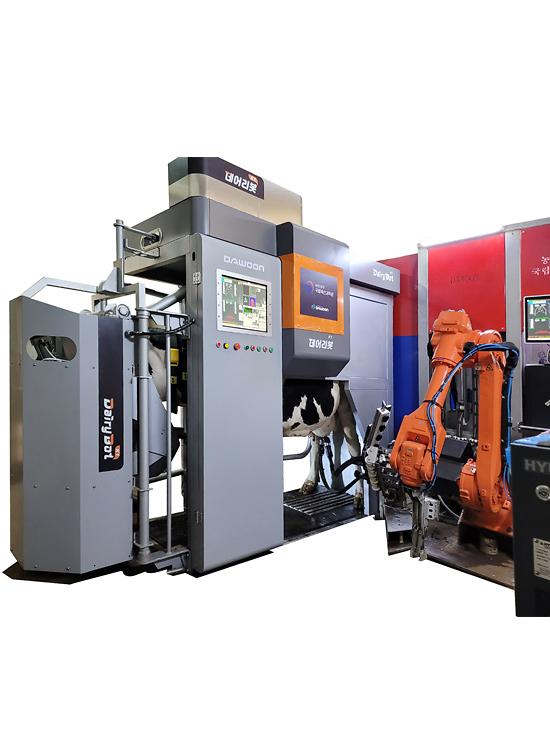 SEOUL -- South Korea has succeeded in the localization of a milking machine that will use a robot arm to autonomously find a cow's nipples and extract milk. The domestic milking robot will help reduce labor burdens off old dairy farmers' shoulders and popularize autonomous robot machines in the farming industry.

Dairy farmers need to milk their cows twice a day no matter what because milk can build up in a cow's udder if it is not milked daily. When there's too much milk in a cow's udder, it can cause fatal illnesses. According to government data, more than 40 percent of dairy farmers in South Korea are aged more than 60 years old. They spend an average of 42 percent of their work hours milking cows.

Robot milking machines were first introduced in South Korea in 2006. However, the foreign-made machines are very expensive with a price tag of about 350 million won ($299,606) each. There are some 125 autonomous robots used by dairy farmers across the country. Also, some foreign machines collect biological data of cows, making it harder for South Korean researchers to analyze and research data, according to the agriculture ministry.

The Rural Development Administration (RDA), an agriculture technology development body operated by the Ministry of Agriculture, Food and Rural Affairs, said in a statement on August 18 that RDA and Dawoon, a domestic dairy farm robot maker, localized a home-made robot milking machine. The robot will collect and send the biological data of cows to RDA's big data center for analysis.

"The localization of this robot milking machine holds a great meaning as it marks the beginning of the era of data-based digital dairy farming," RDA spokesperson Sung Je-hoon said during a press briefing. "Data will become a valuable asset to the development of South Korea's digital-based precision dairy farming technology."

The autonomous machine will be priced at about 200 million won, which is about 60 percent cheaper than imported robots. RDA said that the maintenance cost of the localized milking machine will be about 50 percent compared to foreign machines. Robots will be demonstrated at five dairy farms in 2022. The distribution of robots is scheduled for 2023. RDA said that the administrative body will promote the use of robot milking machines by providing government subsidies.