Rescuers use drones to locate and rescue lost hikers 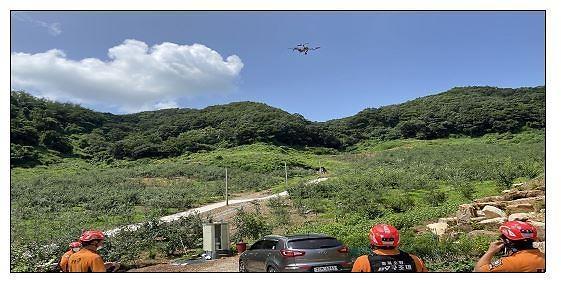 [Courtesy of the National Fire Agency]

SEOUL -- Rescuers used drones to find two hikers who were lost in the mountains. The drones were connected to a mobile control tower that can relay video feeds from drones and body cameras of rescuers.

The National Fire Agency (NFA) said in a statement that rescuers used drones to save two people lost in forested hills in Chungju some 110 kilometers (68 miles) southeast of Seoul on August 15. The drones helped rescuers find the lost people and guided them down the hills

Drones are remotely controlled flying robots. Drones designed for rescue purposes are equipped with optical equipment such as a camera, radar, and thermal imaging sensors. Drones are widely used by South Korea's military and government organizations for monitoring and surveillance. Some drones are used to carry out structural safety checks of hard-to-reach places like the top of a chimney or struts built under a bridge.

"We will enhance our field crew's capabilities so that they can use drones more effectively in various disaster situations," the National Fire Agency's emergency rescue division director Bae Deok-gon was quoted as saying.
© Aju Business Daily & www.ajunews.com Copyright: All materials on this site may not be reproduced, distributed, transmitted, displayed, published or broadcast without the authorization from the Aju News Corporation.