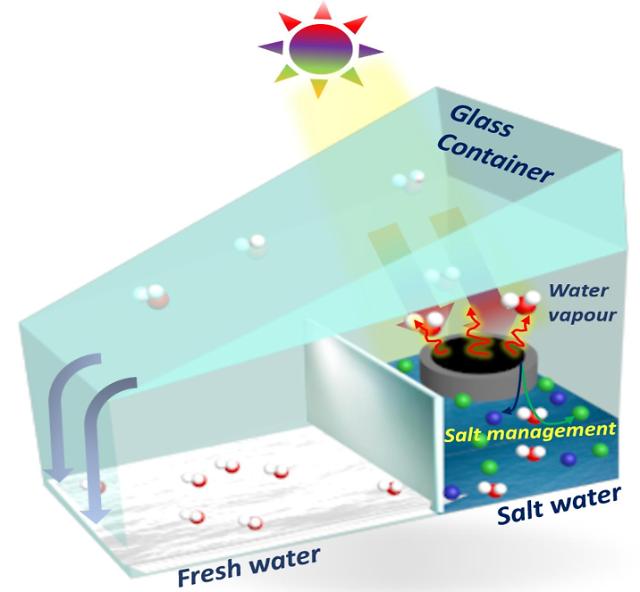 
SEOUL -- Researchers from a state research university have developed a 3D-printed solar evaporator that uses special light absorbent for maximized efficiency. Because the device is 3D-printed, it is very affordable.

Desalination is a technique that separates freshwater from saltwater. The technique is widely used in many countries, especially in the Middle East where water resources other than the ocean are scarce. Saudi Arabia's Ras Al Khair, one of the world's largest desalination plants, produces about 1,036,000 cubic meters of water per day.

There are mainly two types of desalination techniques -- thermal desalination, and membrane desalination. The thermal method uses sunlight or other heat sources to evaporate water and leave salt behind. When water vapor travels through a condenser, it is cooled down to become droplets of fresh water. Conventional solar evaporators have an efficiency of up to 80 percent. The membrane method pushes saltwater through a semipermeable membrane to filter salt and other impurities. Only pure water passes through the filter.

The Ulsan National Institute of Science and Technology (UNIST) said in a statement on August 22 that its research team led by professor Jang Ji-hyun had developed a 3D-printed solar evaporator that uses sunlight to create water vapor that is cooled to produce freshwater. According to researchers, a solar evaporator device sized one square meter can produce more than 1.6 kilograms of freshwater per hour.

"This solar evaporator will be able to solve the world's water shortage problems in a very affordable way," Jang told Aju Business Daily. The device is highly efficient thanks to its special light absorbent that improves the device's desalination ability to up to 90 percent efficiency. The absorbent also prevents the accumulation of salt on the surface of the machine.

Originally, the evaporator was designed to be equipped on a floating platform for easy supply of seawater. "If the supply of saltwater is sufficient, the solar evaporator will be able to produce a lot more fresh water at the desert where the sunlight is very strong," Jang said.