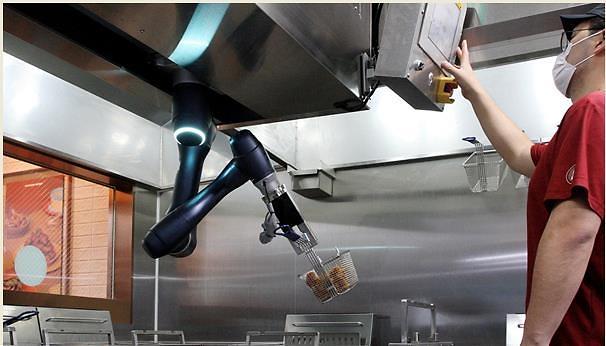 SEOUL -- South Korea's popular chicken franchise Kyochon has opened the brand's first store with a cooking robot that helps its human coworkers in the kitchen.

Kyochon F&B, a fried chicken franchise operator, said in a statement on August 24 that the company opened its first robot store in the western port city of Incheon. The collaborative robot that was jointly developed by Kyochon and Doosan Robotics, the robot technology wing of South Korea's Doosan Group, is programmed to cook fried chickens.

Grand View Research, a global market research firm, predicted that the global market for collaborative robots, also known as cobots, will reach $10.1 billion by 2025. The helper robots are widely used in various industries including factories due to their autonomous operation functions and interactive capabilities.

"We are currently working with one more robot manufacturer other than Doosan Robotics to expand the use of cobots," Gil Yeong-hwa, a Kyochon PR manager, told Aju Business Daily. He said that the fried chicken franchise operator is planning to promote the adoption of cobots at its stores across the country. Eventually, Kyochon's cooking bot will be upgraded to have the ability to brush the company's iconic soy sauce onto fried chicken pieces.