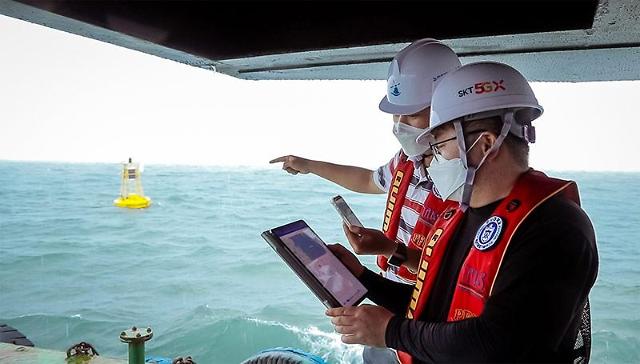 
SEOUL -- A pilot study involving SK Telecom, a top mobile carrier in South Korea, has been conducted to monitor sea pollution in real-time by connecting an underwater base station and detection sensors to a communication network. The study would provide an opportunity to quickly check for seawater contamination and replace the method of collecting seawater samples manually for lab analysis.

SK Telecom (SKT) teamed up with Hoseo University and the state-run Korea Atomic Energy Research Institute (KAERI) for a study from August 23 near a suspension bridge in the southern port city of Busan by installing related equipment at a depth of about 30 meters. The company said the study would help South Korea establish a key infrastructure in the era of Internet of Underwater Things (IoUTG) as it can collect and analyze information in real-time as well as overcome the limitations of sonic wave communication.

An underwater base station and a node equipped with detection sensors were placed on the seafloor to measure marine pollution every ten minutes and transmit related information through sonic wave communication to a surface buoy installed with a modem and a multi communication network switching system that selects an optimal communication network and sends data to a management platform on land.

The management platform monitors and manages various information such as the location and configuration of sensors, base stations, controllers, communication status, water temperature and salinity, SKT said, adding its network design optimization solution would be an important foundation for predicting network coverage and measuring sea areas that can be linked to underwater networks.

The study in Busan was done as part of a research project involving SKT, seven universities and two research bodies to secure core technologies for communication networks based on underwater base stations. It is aimed at developing technologies that can be used in a wide range of areas such as the monitoring of marine disasters, communication between underwater robots, management of marine plants, and the establishment of a port defense system.

Unlike light waves and electromagnetic waves used for communication on land, underwater communication is very limited because signals get lost. In 2018, a new system to receive and send text and photo images using a buoy and underwater sensors was tested successfully between a surface buoy and an underwater base station.