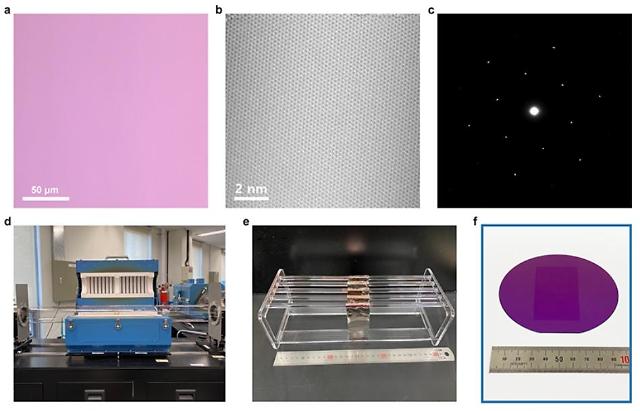 SEOUL -- In a crucial technological breakthrough, researchers have opened a new way for the production of high-performance large-area graphene-based materials by succeeding in the creation of single-crystal graphene that has no wrinkles, folds, or adlayers. Graphene seen as a "dream material" by many industries is a single layer of carbon atoms bound in a honeycomb-like hexagonal lattice.

Graphene layers stacked on top of each other are called graphite. It is the thinnest and the lightest material. The two-dimensional layer of carbon atoms is transparent and about 200 times stronger than steel. It can be stretched to up to about 20 percent of its original size and has about 100 times more conductivity than copper.

Graphene has the potential of enhancing the efficiency and performance of products including flexible displays, semiconductors, composite materials, and aerospace components. However, graphene is extremely thin, making it very easy to be folded, wrinkled and unevenly stacked during its production phase called "growing."

The Institute for Basic Science (IBS) said that the research success was achieved in a joint study by graduate students from the Ulsan National Institute of Science and Technology (UNIST) and researchers led by Rod Ruoff who heads the institute's Center for Multidimensional Carbon Materials department. "We have finally seen the fruit of a seven-year research project," Ruoff said in a statement on August 25, calling for further research on the unique characteristics of flawless graphene.

In 2019, Ruoff's team once succeeded in creating adlayer-free large-area single-crystal graphene and found that folds were created on the surface of graphene during the cooling process after the film was grown using methane at temperatures of up to 1320 Kelvin degrees (1046.85 degrees Celsius) on copper foils.

To create "perfect graphene," researchers grew the atom-thin carbon film on copper foils at temperatures between 1,000K and 1,030K. Graphene created in a such way was fold-free even after it went through a cooling process. The fold-free graphene was seven times more efficient in charge transfer than silicon and three times more efficient than conventional graphene films. The research team was able to simultaneously grow five graphene films sized four centimeters by seven centimeters on a copper foil.

According to the Ministry of Science and ICT, the newly-found single-crystal large-area "perfect graphene" can be used for the production of high-performance integrated circuits that show the same performance regardless of the direction of electric currents. When stacked with other two-dimensional materials, new devices that have unseen performance capabilities.