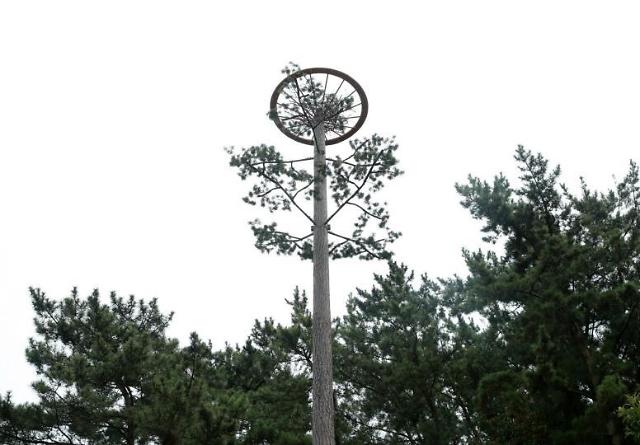 In South Korea, blackouts occur frequently due to birds' nests every year, with the most electric accidents caused by magpies. Data released by the Korea Electric Power Corporation (KEPCO), a state utility company, shows that magpies have caused up to 30 blackouts annually. From 2008 to 2017, roughly 8.7 billion won ($7.4 million) was invested in 552 professional bounty hunters to slaughter about 2.1 million magpies by KEPCO.

Taean County said in a statement on August 30 that two 13-meter-(43 feet)-tall artificial nest towers were set up to protect two storks released from a regional bird rehabilitation park. Storks are classified as natural monuments in South Korea. At the top of towers, a 2-meter-(6.6 feet)-diameter rounded protection material is installed so that storks can safely nest and spawn.

"We have installed power pole nests to prevent blackouts and electrocution of the endangered birds," an unnamed Taean official was quoted as saying. The official added that the southeastern county will continue to create an environment for stork families.