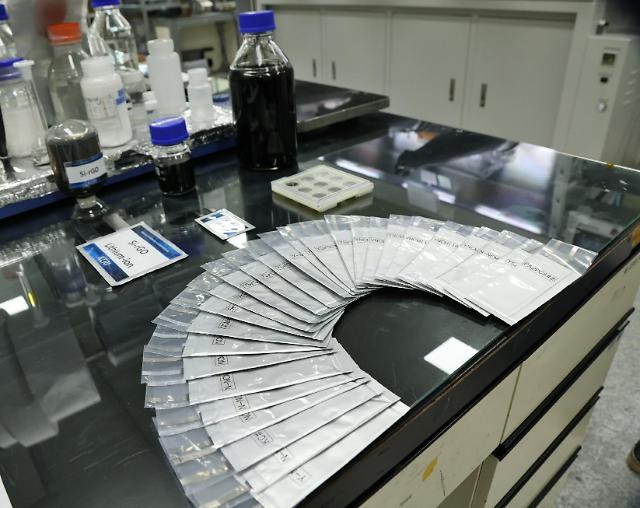 
SEOUL -- A research team in South Korea has developed technology to manufacture anode materials for high-capacity lithium-ion batteries through the combination of silicon and graphene. The technology strengthened price competitiveness while solving shortcomings of silicon, which is used for anode materials.

Silicon has a higher energy density than graphite and is much faster in charging and discharging. However, it has the problem of expanding volume during charge and discharge. Graphene, which is a single layer of carbon atoms bound in a honeycomb-like hexagonal lattice, is electrochemically stable and can effectively protect silicon from electrolytes.

The state-run Korea Electrotechnology Research Institute (KERI) said that its research team has developed a technology that can solve the problem of silicon's volume expansion and upgrade battery performance.

Among other things, KERI highlighted excellent price competitiveness as the biggest strength of its technology as it can use inexpensive silicon. As a prototype based on silicon-graphene composite material, KERI has produced a pouch-type full cell and completed the registration of patents. The technology was transferred to HNS, a domestic company for commercialization and mass production.

Battery suppliers are trying to develop cheaper, more efficient, more powerful batteries. Cylindrical cells have high specific energy and good mechanical stability, but they are commonly used for portable applications. Prismatic cells are encased in aluminum or steel for stability and satisfy the demand for thinner sizes. Wrapped in packages, prismatic cells make optimal use of space and allow flexible design but they can be more expensive to manufacture and have a shorter cycle life than cylindrical design.

Pouch cells use laminated architecture in a bag, offering a simple, flexible and lightweight solution to battery design. They are light and cost-effective but exposure to humidity and high temperature can shorten life. Swelling is a concern.