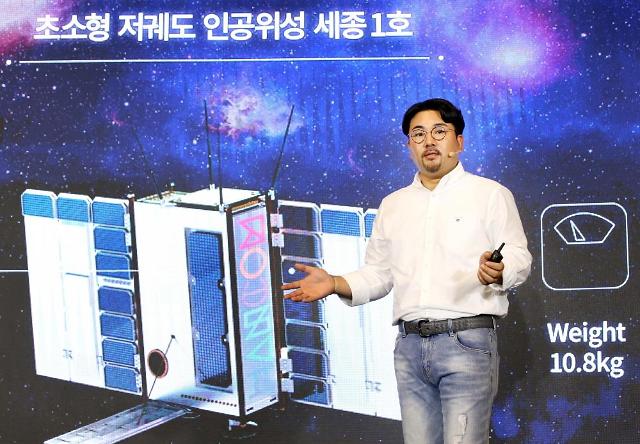 SEOUL -- South Korea's comprehensive information technology group, Hancom, will launch a small low earth orbit satellite during the first half of 2022 to provide integrated image analysis services at low cost. The satellite weighing 10.8 kilograms would collect video data by circling the Earth 12 to 14 times a day at 500 kilometers (310 miles) above the ground, focusing on the agriculture sector.

The satellite, named Sejong 1, is under development with Spire Global, a U.S. space-to-cloud data and analytics company that specializes in the tracking of global data sets powered by a large constellation of nanosatellites. Hamcom aims to launch more than 50 cluster satellites and provide video services that can be used to analyze crop conditions and predict grain production in South Korea and Southeast Asia.

"Satellites are being used for national security, but we will build infrastructure with the goal of utilizing civilian utilization from the beginning and provide integrated image analysis services at low cost," Hancom InSpace head Choi Myung-jin said on September 2. The company will work with a Canadian company to jointly develop sensors for satellites and jump into an ultra-high resolution sensor market.

Hancom has made an aggressive investment in the drone sector by acquiring InSPACE, a satellite and UAV ground platform developer startup, in 2020. The company would release drones for special purposes and develop multiple drone control service platforms. By securing satellites, drones, and ultra-high resolution sensors, Hancom will establish a video data service belt that covers space, aviation, and ground.