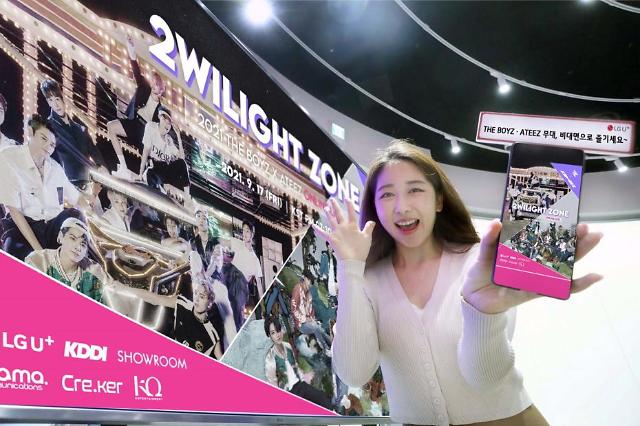 
SEOUL -- KDDI, a telecom operator in Japan, tied up with South Korea's mobile carrier LG Uplus to co-produce an online K-pop concert featuring two idol groups, The Boyz and Attez. It is designed to provide a non-face-to-face experience to global fans and increase their accessibility at a time when it has become difficult to hold large-scale events due to a COVID-19 pandemic.

The concert titled 'THE BOYZ & ATEEZ ONLINE LIVE: 2WILIGHT ZONE" will be held on September 17. It would be the first non-face-to-face performance in which Korean and Japanese mobile network operators would collaborate. Real-time performances will be broadcast exclusively by U+IDOL LIVE, an entertainment tool app developed by LG Uplus (LGU+).

Fans can enjoy at least 10 songs for about 90 minutes. "We hope the online concert prepared by both companies can relieve the stage thirst of global K-pop fans a little bit," LGU+'s extended reality (XR) service head Choi Yoon-ho said in a statement on September 6.

The Boyz, which debuted in 2017, made a comeback with their 6th mini album "THRILL-ING" on August 9. Ateez, an eight-member band that debuted in 2018, is set to release its seventh mini-album on September 13.

The concert comes amid a deep slump in South Korea's performing arts industry. Almost all offline performances have been canceled due to COVID-19. Only a small number of popular artists have earned income through online concerts while many other artists remain inactive or had to seek new ways to make a living.

In August, LGU+'s technology was used for a special XR concert held by AOMG, a hip-hop label founded by Jay Park, a Korean-American rapper and singer, allowing audiences to enjoy artists' realistic performances as if they were in virtual worlds. XR encompasses a wide spectrum of hardware and software that enable content creation for virtual reality, mixed reality and cinematic reality. Users can generate new forms of reality by bringing digital objects into the physical world and bringing physical world objects into the digital world.