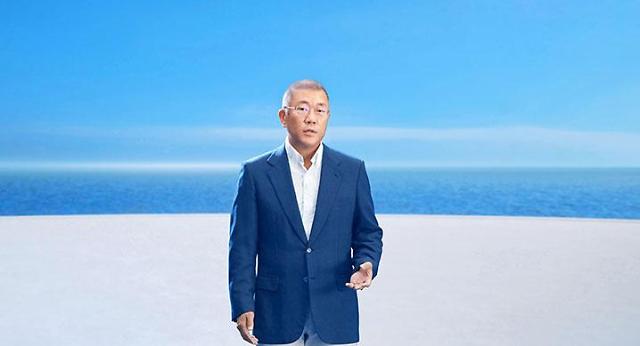 
SEOUL -- South Korea's Hyundai auto group showcased a concept hydrogen-powered hybrid sports car with a maximum output of over 500 kilowatts that can accelerate from zero to 100 kilometers (62 miles) per hour in less than four seconds and achieve more than 600km on a single charge.

The concept model called "Vision FK" installed with a fuel cell energy converter was presented at an online forum in which the auto group presented plans to popularize hydrogen by 2040 through the introduction of new technologies and mobility solutions in transportation and other industrial sectors.

In May 2019, Hyundai made a $90 million investment in Rimac Automobili, a technology powerhouse based in Croatia, to develop prototypes for an electric sports concept car and a high-performance fuel cell electric vehicle. Albert Biermann, head of the auto group's research and development division, said that Hyundai and Rimac would design a compact fuel cell electric sports car

"Hyundai Motor Group's vision is to apply hydrogen energy in all areas of life and industry such as our homes, workplaces and factories. The goal is to make hydrogen readily used for everyone, everything, and everywhere," Chairman Chung Eui-sun said in a statement on September 7. By 2028, the group would apply its fuel cell system to all commercial vehicle models.

Fuel cell systems have the potential for deployment across diverse applications by 2040, including high-performance vehicles, urban air mobility, robots, aircraft and large ships, Hyundai said, adding it would introduce a new generation fuel cell system in 2023 that realizes a reduced price and volume with significantly improved durability and output.