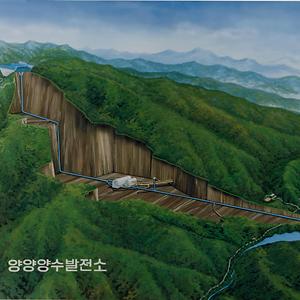 
SEOUL -- South Korea's nuclear power plant operator has adopted a private 5G data communication solution developed by SK Telecom that will serve as an emergency hotline between a power plant and its control tower when the wired communication network is down due to various factors including natural disasters and machine breakdowns.

Workers at different parts of a power plant communicate using wired networks. They have to visit locations suspected of malfunctioning and identify problems. It takes up to days to fix and restore the wired network which is relatively safe from the hijacking of radio waves. The network is sometimes rendered useless in cases of emergencies.

The ultra-fast private wireless data communication system was demonstrated at a pumped-storage hydroelectricity power plant in Yangyang some 150 kilometers (93 miles) east of Seoul in 2021. The communication solution was used to connect the upper dam and the lower control tower.

A pumped-storage hydroelectricity dam pumps water from the lower dam up to the upper dam. Power is generated by water stored in the upper dam using the gravitational potential energy of water. Normally the electricity consumed in pumping water makes the power plant a net energy consumer, but generating costs can be saved if the pumping process uses the low-cost off-peak electric power. Electricity is generated when electricity demands are high.

The facility in Yangyang is an underground power plant connected to its upper dam some 1,000 meters above. The 1,000-megawatt plant located 700 meters underground was built next to Namdae River for the easy supply of water. Operations of the first generator began in February 2006.