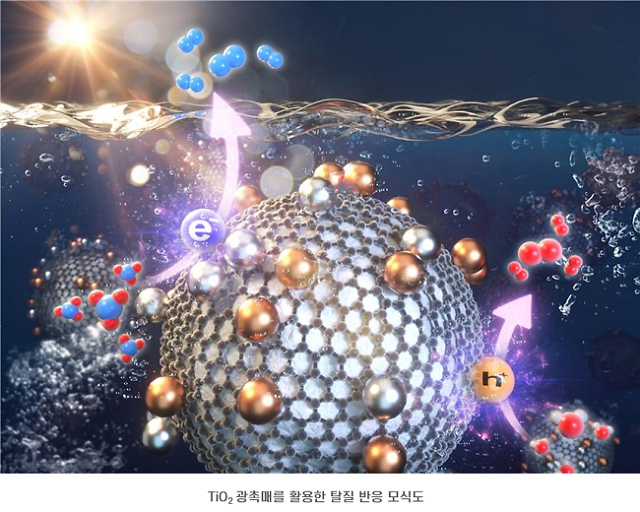 SEOUL -- South Korean researchers have developed an eco-friendly denitrification technique using a photocatalyst. The technique, which converts nitrate (NO3−) and nitrite (NO2-) into nitrogen gas (N2), can be used to prevent and reduce green tide, a phenomenon also known as algal bloom caused by the overgrowth of algae. The process of using a photocatalyst is very eco-friendly and requires no chemical reductants.

Green tides occur in lakes and rivers during late spring and summer when the level of nitrate and nitrate content in water is very high and the temperature rises to create an ideal environment for the rapid over blooming of green macroalgae. The phenomenon can be seen in waters with very slow fluid-moving speeds. The overgrowth of algae turns water into a thick porridge-like green sludge with very low oxygen levels that slowly suffocates aquatic animals and plants to death.

Denitrification is one of the very few solutions to prevent the green tide. By removing nitrate, the main food source of green macroalgae, the green tide can be controlled. However, denitrification methods using chemical reductants can damage the environment. Normally, boats are used to help aquatic animals and plants survive in waters affected by the green tide. When propellers turn, water is circulated to provide oxygen.

Pohang University of Science and Technology (POSTECH) said in a statement on September 14 that its research team has developed the country's first denitrification technique that does not use chemical reductants. Researchers used a photocatalyst composed of titanium oxide (TiO2), graphene oxide (rGO) and nanoparticles of copper-lead alloy (Cu-Pd) to break down nitrate and nitrite into nitrogen gas and oxygen.

Through tests, researchers found that the photocatalyst was able to completely break down 600 parts-per-million (ppm) nitrate into nitrogen with a conversion efficiency of about 98 percent without using chemical reductants. POSTECH said the photocatalyst created almost zero nitrites, which is a byproduct of the denitrification process using catalysts.