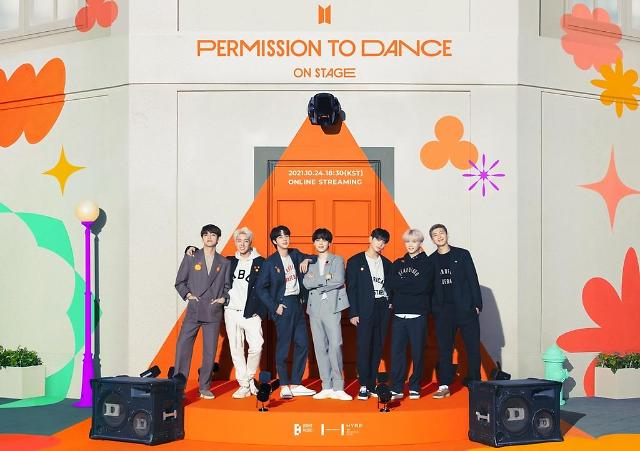 SEOUL -- K-pop sensation BTS will host a virtual concert to comfort global fans grounded by COVID-19. The online performance is the first performance to be held by the seven-member band after "2020 Map of the Soul" world concert tour was canceled in August 2021. The world tour came to a stalemate for more than a year due to a COVID-19 pandemic.

BTS will hold "Permission To Dance On Stage" through online live streaming on October 24, said Big Hit through Weverse, BTS's official fan community platform. Further information about reservations will be announced later. “Wherever you are, that’s where our stage will be! Join in and dance together. We don’t need permission to dance,” BTS' music label said.

In August 2021, Big Hit canceled 2020 Map of the Soul concert tour, which was originally scheduled for April 2020, due to a coronavirus pandemic. Starting in Seoul, the world tour was scheduled to be held in 18 cities in countries including the United States, Canada and Japan. When the cancellation was announced, Big Hit said the company was working on a new form of performance.

BTS has showcased the K-pop industry's exceptional ability to adapt and utilize new global trends through virtual concerts in 2020 when a coronavirus pandemic hit the global community. Through its live virtual concert, BTS attracted about 756,600 fans in June 2020 using various digital and social media platforms. The concert, performed in a special studio, was the largest paid online concert in the world.

Since "BTS Map of the Soul ON:E" took place in October 2020, this year's performance will be the band's first online concert in about a year. The last year's two-day concert attracted more than 990,000 fans.