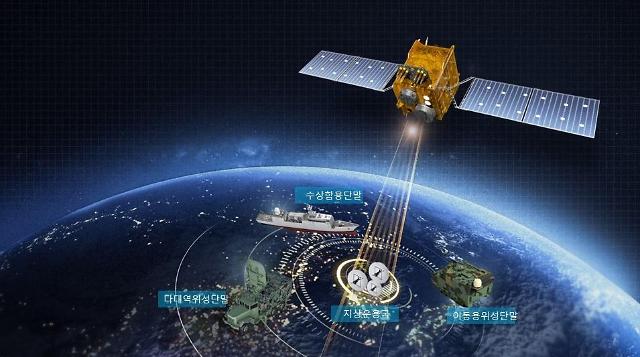 The military project is aimed at supporting stable communication 24 hours a day anywhere by supplementing a ground communication system that could not avoid shaded areas where communication was cut off due to a topographic environment.

LIG Nex1 said in a regulatory filing on September 15 that it has signed a contract worth 214.6 billion won ($183 million) with the Defense Acquisition Program Administration (DAPA) controlled by the defense ministry for a project to secure a communication system with significantly enhanced core performance and security, such as transmission capacity and anti-Jamming capabilities, by 2025.

Other domestic companies related to key components such as modems, antenna devices, and software that efficiently process transmission and reception signals would participate in the production of satellite communication terminals.

Hanwha Systems, a defense contractor involved in the development of high-performance antennas, secured a separate contract worth 360 billion won with DAPA to establish a network control system and supply portable and transportable ground terminals by March 2024.

A communications system utilizing South Korea's private Mugunghwa-6 satellite was put into operation in July, allowing troops to stay connected and use the Army Tactical Command Information System (ATCIS), a battle management system, even when a wired network is not available. Previously, small rear area military units had relied on ground communication networks.