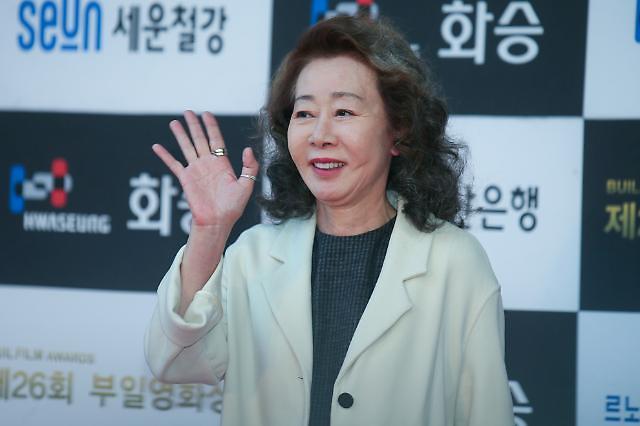 SEOUL -- South Korea's veteran actress Youn Yuh-jung was included in Time magazine's list of 100 most influential people of 2021. In the 2021 film "Minari," directed by Lee Isaac Chung, the 74-year-old actress presented her outstanding acting skills which led her to become the first South Korean to win an Oscar award for the Best Actress in a Supporting Role in April 2021.

After making her Hollywood debut in the drama film, Minari, Youn was praised for her performance as a South Korean grandmother in the film about a Korean-American family going through struggles on an Arkansas farm in the 1980s. This led her to win the Oscar. Since Miyoshi Umeki in the 1957 film "Sayonara," Youn became the first Asian actress to win the award in 64 years. She was also honored at the American Screen Actors Guild Awards and the British Academy Film Awards.

Through a commentary published by Time magazine, American actor Steven Yeun congratulated Youn for her selection in the list of the top 100-most influential people of the year. "I've rarely met people with her level of confidence -- it feels like a confidence born from a deep sense of self," the 37-year-old actor said. He added: "I am a fan not just because of her acting prowess but because she has been a singularly unique presence in everything I’ve ever seen her do."

Born in 1947, Youn debuted in a TV drama in 1966. Although she took a career break in the late 1970s and early 1980s when she was married to singer Jo Young-nam, she resumed her acting career after the divorce in 1987. Through her acting career, she played a wide range of characters from a fastidious mother to the charismatic wife of a conglomerate owner in more than some 70 series. Youn is one of the iconic figures in South Korea's film scene.