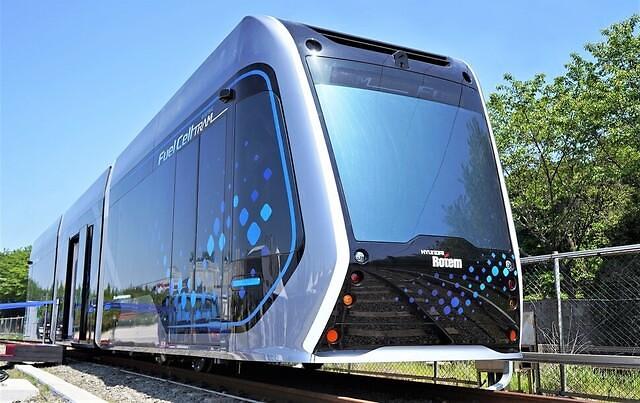 SEOUL -- South Korea launched a state demonstration project to commercialize hydrogen trams by 2023. Fuel cells for automobiles would be modified for 380-kilowatt trams. The project is aimed at securing South Korea's competitive edge in the global eco-friendly train market through early commercialization.

The Ministry of Trade, Industry and Energy pledged the injection of about 42.4 billion won ($36 million) for the development of technologies, saying hydrogen trams can be an alternative to subway trains as construction costs are relatively low and external power supply infrastructure is not required. Hydrogen trams have strengths over electric trams when long-distance driving is required or the frequency of driving is high.

The ministry called for the establishment of a hydrogen tram charging station by 2022. Idle tracks in the southeastern port city of Ulsan would be used to verify optimal driving patterns such as fuel efficiency while driving more than 2,500 kilometers (1,553 miles) cumulatively. Unlike hydrogen cars, hydrogen fuel cells and storage containers must be mounted on the roof to secure boarding space.

Hyundai Rotem, a train-making subsidiary of South Korea's Hyundai auto group, is in charge of system integration and verification, along with five railway parts makers. They would manufacture parts such as motors and braking systems by 2022 and manufacture a hydrogen tram in 2023. College teams and companies will develop technologies for fuel cells and components under the supervision of the Korea Automotive Technology Institute (Katech).

The state-run Korea Railroad Research Institute (KRRI) has embarked on the development of locomotives based on liquefied hydrogen that can operate at a maximum speed of 150 km per hour and cover at least 1,000km on a single charge. The advantage of liquefied hydrogen is its high density compared to compressed gas, which means that more energy can be contained in a given volume for easy transportation. The institute hopes to put hydrogen locomotives into practical applications in 2025.