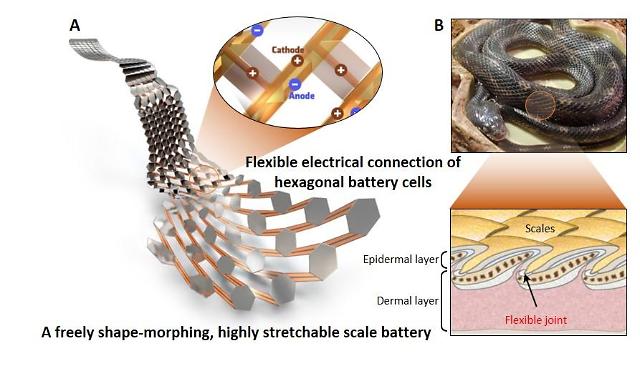 SEOUL -- An innovative flexible battery shaped like snake scales was developed by a state research institute in South Korea. It can be stretched and return to its original size. Scale-like battery pockets can mimic the movement of snakes to crawl into small spaces. Researchers regard the battery as an ideal power source for soft rescue robots and wearable devices.

While many robots are encased in a hard armor made of metal alloy or plastic, soft robots normally have flexible and stretchable skin so that they can squeeze into tiny tube-like spaces such as the inside of a pile of building debris or water pipes. But because many soft robots are very small compared to their brothers working in industrial fields, it is hard to install large-sized batteries. Some soft rescue robots are connected to power cables. 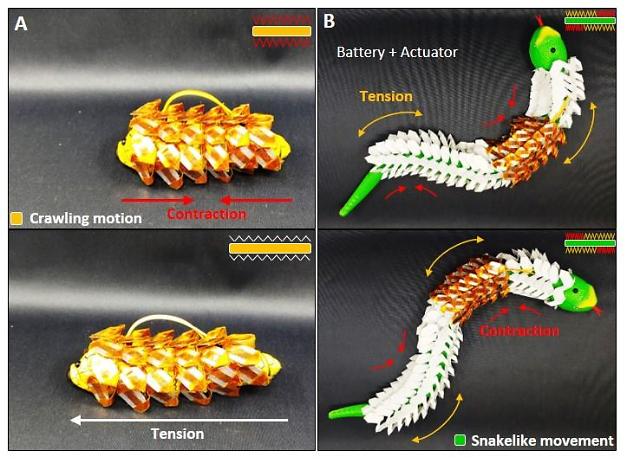 The Korea Institute of Machinery & Materials (KIMM) said that its research team led by senior researcher Jang Bong-kyun and principal researcher Hyun Seung-min developed a battery pack that consists of hexagonal lithium polymer cells linked by connective components made of polymer and copper. The hinge-like component allows battery cells to fold and unfold.

"Unlike conventional wearable devices in which frames and batteries are combined in a tight formation, this new technology enables flexible movements by connecting several small, hard batteries in a scale-like structure," the institute said in a statement on September 28.