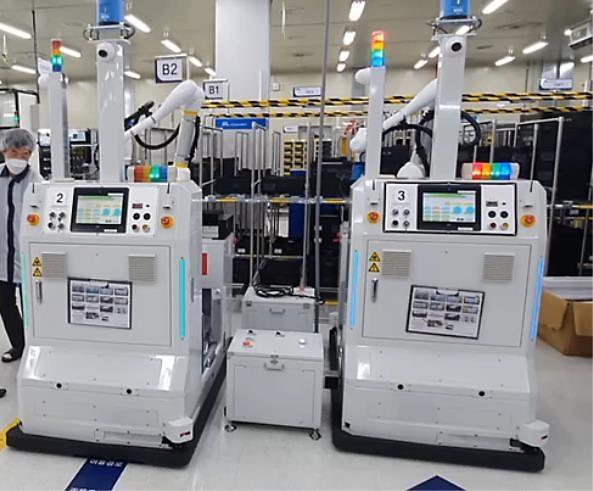 [Courtesy of the Ministry of SMEs and Startups]

Cooperative robots are widely used in various sectors especially at factories because of their autonomous operation functions and interactive capabilities. They can pick up tools and pass them to workers or hold up shoe parts so that craftsmen can work with their backs straightened out. Kyochon F&B, a fried chicken franchise operator, also adopted a cobot in the western port city of Incheon in August 2021 to cook fried chickens alongside their human coworkers. According to data released by Grand View Research, a global market research firm, the global market for collaborative robots will reach $10.1 billion by 2025.

Until 2024, South Korea will accelerate the demonstration of mobile cobots in Daegu some 240 kilometers (149 miles) southeast of Seoul. Daegu was designated as a regulation-free zone for mobile cobots in July 2020.

The Ministry of SMEs and Startups said in a statement on October 1 that mobile cobots will be demonstrated to pick up and deliver small-sized cargos inside a manufacturing facility. Cobots were not allowed to interact with human workers while moving due to the current safety regulation. Through the demonstration, the ministry will see if mobile cobots should be allowed to be operated while moving on carts and interact with human workers.
© Aju Business Daily & www.ajunews.com Copyright: All materials on this site may not be reproduced, distributed, transmitted, displayed, published or broadcast without the authorization from the Aju News Corporation.