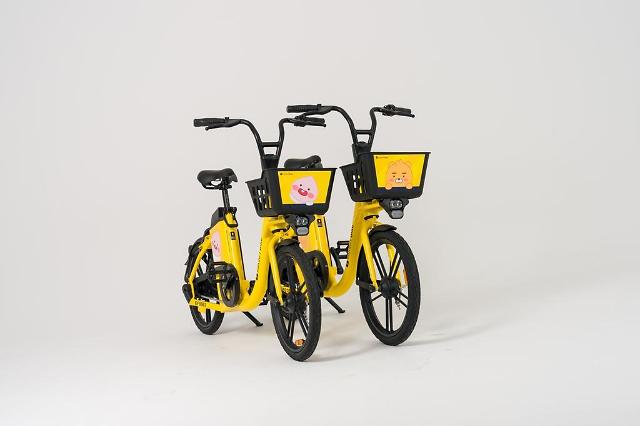 SEOUL -- The test operation of 1,000 electric bicycles (e-bike) will begin in Cheongju some 109 kilometers (68 miles) south of Seoul. The city chose Kakao Mobility, the mobility wing of South Korea's internet service giant Kakao, as the operator of an e-bike sharing service.

One of the most successful bike-sharing or bike rental services in South Korea is Seoul Bike, also known as "Ttareungi", run by Seoul City. There are about 2,600 Seoul Bike stations located mainly near subway stations and populated areas. More than 40,500 Seoul Bikes are in operation. In 2020, Ttareungi was used over 2.2 million times only from February to March. Due to its growing popularity, Seoul test-operated 1,000 e-bikes in 2019.

Cheongju said in a statement on October 6 that Kakao Mobility would deploy a total of 1,000 e-bikes during the first two weeks of October for test operation. Through Kakao Mobility's one-stop mobility service app, citizens can register and use the e-bike sharing service. About 1,500 won ($1.3) will be charged for the first 15 minutes and 100 won will be added every minute. There will be an extra charge of 20,000 won if the bikes are not returned to designated zones.

"We will test-operate private shared e-bikes until the end of 2021 before signing an official agreement with Kakao Mobility to offer more convenient services to citizens," an unnamed Cheongju official was quoted as saying.

Kakao Mobility launched its e-bike service in 2019 in the western port city of Incheon and the southeastern satellite city of Seongnam with 100 e-bikes. The company now operates more than 10,000 e-bikes nationwide. While most bike-sharing services require users to rent and return bikes to designated stations, Kakao allows users to lock up bikes at their destination.
© Aju Business Daily & www.ajunews.com Copyright: All materials on this site may not be reproduced, distributed, transmitted, displayed, published or broadcast without the authorization from the Aju News Corporation.