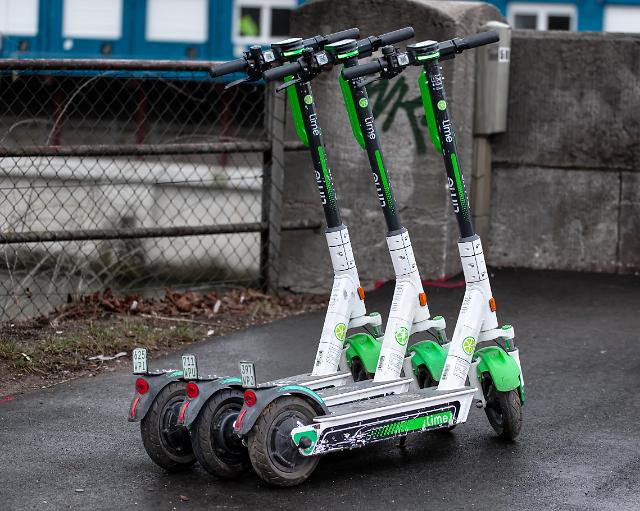 SEOUL -- Daegu City will adopt an ordinance to prevent electric scooters from being left unattended on sidewalks. Scooter rental companies will be slapped with a fine of up to 13,000 won ($11) per scooter to ensure the safety of pedestrians in Daegu some 240 kilometers (149 miles) southeast of Seoul.

Last-mile mobility services involving electric scooters and bicycles were first introduced by mobility service startups in Seoul and its satellite cities in 2016. Some 90,000 scooters and bicycles are in operation across the country. Data released by the Korea Transport Institute, a state-funded research institute, showed that about 220,000 last-mile service scooters will be used to carry people nationwide in 2022.

However, scooters have become obstacles on sidewalks as they are left strewn on the ground until service trucks retrieve them around midnight for charging. Some are left untouched for days as the operation of scooter-retrieving trucks is limited. The Seocho District office in southern Seoul designated some 50 places in areas busy with on-foot traffic such as around subway station exits as parking zones for electric scooters and other last-mile mobility services to minimize such inconveniences.

Daegu said in a statement on October 6 that the city will revise the existing ordinance by the end of 2021 to make changes so that the city government can issue fines to scooter rental companies to prevent safety accidents on sidewalks. "We will adopt a new ordinance because electric scooters damage city landscapes and cause inconveniences to pedestrians," Daegu's transportation official Choi Young-ho was quoted as saying.