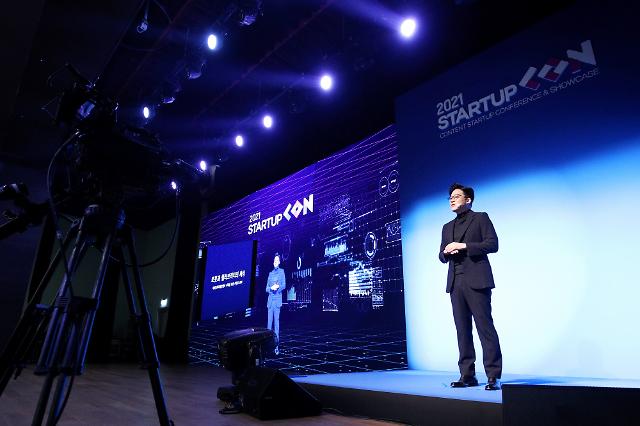 SEOUL -- SM Entertainment, an entertainment powerhouse in South Korea, proposed joint ventures or investments with information technology startups, following up on a new vision outlined by founder Lee Soo-man in June to pursue a "content universe" where original content will be infinitely expanded and recreated by individual prosumers who both consume and produce.

"As a content company, I want to talk to people in startups in a variety of ways, even talking about joint ventures and investments," SM co-CEO Lee Sung-su said in a keynote speech at a seminar hosted by the Ministry of Culture, Sports and Tourism and the Korea Creative Content Agency on October 7.

Lee Sung-su predicted barriers between IT, AI and content industries are collapsing, citing a post-COVID era and the metaverse, which is a collective virtual shared space, created by the convergence of virtually enhanced physical reality and physically persistent virtual space. "The current situation is that IT companies invest more in content and content companies like us are more sensitive to IT."

SM is trying to expand platforms to the metaverse, saying culture would be combined with technology to present new content experiences and pursue a worldview called "SM Culture Universe (SMCU)." The company would carry out an "unimaginable" SMCU through the production of killer content and the expansion of its intellectual property.

"We will focus on creating an SMCU metaverse where content IP where various types of independent IPs such as music, music video, and performance are connected each other and expanded," Lee Sung-su said, expressing his willingness to expand the cultural space that crosses reality and a virtual world.

"Many people seem to feel that K contents such as squid games are becoming the center of content around the world," the co-CEO said, adding his company would try to turn Seoul, the epicenter of K-pop and K-culture, into a mecca of culture around the world.