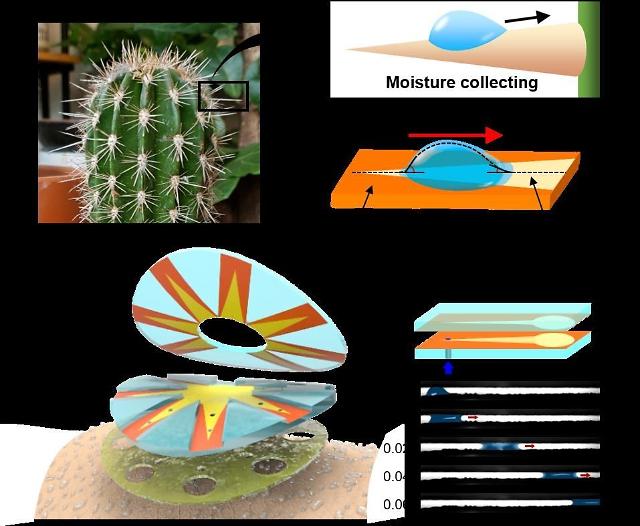 
SEOUL -- Researchers have developed a sweat sensor inspired by cactus spines that can evenly collect sweat on the skin for health monitoring. The sensor will become very useful in the medical sector, especially for diabetes patients who have to collect blood for analysis several times a day.

Along with blood, sweat can be used as an important sample to monitor health, but its irregular and low secretion mechanism makes it hard for sensors to collect enough and even quantities of the body fluid. Because of its characteristics, the uniformed collection technique of sweat has been a hard problem to solve. Various sensors were developed to collect and analyze sweat but they also face similar problems related to the uneven secretion of body fluid. Medical specialists favor collecting blood using invasive tools such as needles.

Pohang University of Science and Technology (POSTECH) said in a statement on October 7 that its research team has developed a cactus-spine-inspired sweat-collecting patch that has wettability-patterned channels on a nanostructured surface. The channels are specially shaped to cause a unidirectional Laplace pressure that transports sweat to the patch's sensing area. They can transport body fluid even when it is aligned vertically.

Laplace pressure is the pressure difference between the inside and outside of a curved surface. A cactus uses its spines, also known as thorns, to collect water from the atmosphere when it is foggy using the Laplace pressure effect. Water droplets form on the barbs to move onto the spine to eventually run down the trunk of a cactus to be consumed.

"This sensor technology can be used in health management wearable technologies such as for the monitoring of blood sugar levels," Cho Kil-won, a POSTECH professor, was quoted as saying. The research was published via the October 7 issue of Advanced Materials, an international online science journal.