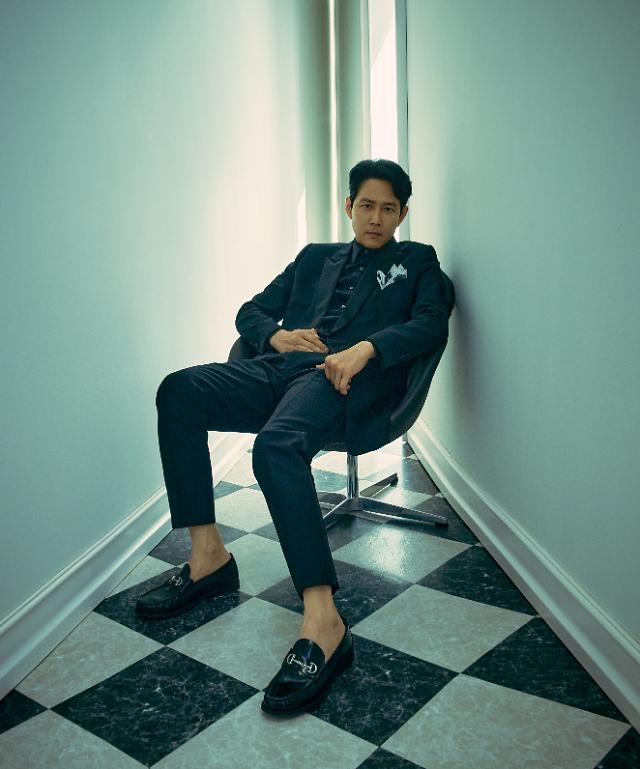 SEOUL -- Lee Jung-jae who starred as the main lead of Squid Game, a South Korean survival drama television series streaming on Netflix, felt a sense of fear when he made his first reading of a "grotesque" scenario. He attributed the drama's explosive worldwide popularity to a great harmony of real aspects and unique settings.

"I think that's because of great harmony. Although it has a very unique setting, it also has a realistic aspect, so I think these points seem to be well harmonized in combination," said the 48-year-old who acts as Seong Gi-hun, a divorced and indebted chauffeur who lives with his mother and struggles to support his daughter financially.

The series, released on September 17, centers on a contest where 456 players, drawn from different walks of life but each deeply in debt, play a set of children's games with deadly penalties for losing for the chance to win a 45.6 billion won ($38 million) prize.

"I thought it was grotesque. I felt a sense of fear," the actor said of his first impression of the scenario. "It can be called 'survival game' or 'death game,' but each game contains the sorrow and hardships of characters. It was meticulously explained why they had no choice but to participate in the game."

Lee recalled that the unforgettable scene was when he struggled to cut out and lick Dalgona, the Korean version of a sugar toffee. "There was a scene where Gi-hun licked it and I wondered, "Should I lick it this much?" The director wanted me to do more. And I worked hard thinking that I could do so because I had to risk my life."

Squid Game was a turning point in Lee's career because he had to show a different look and different acting. "I felt that I threw off a lot of things," the actor said, adding he made facial expressions, breathing, and movements that he has rarely used.

"I was thinking about new characters and acting. As I got older, I've received only strong roles like villains. I've tried to show you a different look and different acting in it, but there's a limit. I met Gi-hun when I was thinking, "How can I show you something new? I thought it would be nice to play a character that can be seen in everyday life," Lee said.