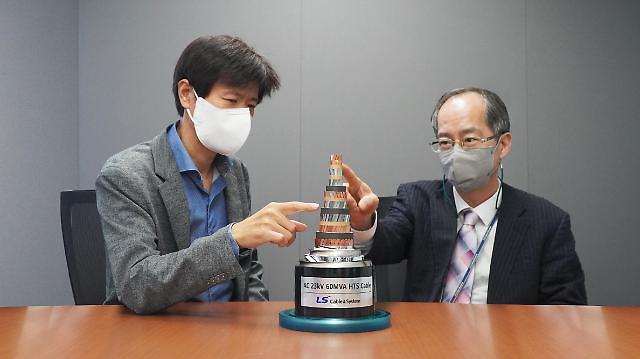 LS C&S has worked with KEPRI, a research unit of South Korea's state utility Korea Electric Power Corp. (KEPCO), to develop a 23 kilovolt (kV)-class superconducting coaxial cable that has significantly increased power transmission. Out of three companies that have succeeded in developing next-generation superconducting cables, LS C&S said its product is the first to receive certification from the International Electrotechnical Commission (IEC).

LS C&S said that the new product can improve the structure of superconducting layers to increase power transmission by more than 20 percent compared to existing products while reducing production costs by more than 10 percent. The company said its new cable can be applied to KEPCO's superconducting platform business that will begin in 2022.

The superconducting platform business can reduce the size of substations to less than a tenth of existing ones and reduce construction costs by more than 30 percent, the cable company said, adding it would increase its use in downtown areas where it is difficult to expand power facilities.

With its new product, LS C&S aims to expand superconducting cables in domestic and foreign markets. "Thanks to the global ESG management trend, the superconducting business is expected to expand around North America and Europe. We will make efforts to enter the global market based on our commercialization experience at home," CEO Myung Roe-hyun said in a statement on October 13.