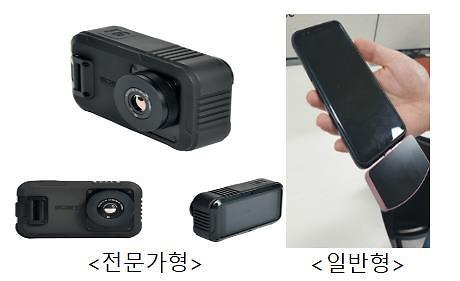 SEOUL -- A state-sponsored research body in South Korea has developed a new device that can capture data transmission signals from high-performance hidden cameras installed in places such as hangers and desk clocks for candid shooting, an act of taking photographs without consent in private and public places, that has been an annoying social problem.

Instead of detectors being used to detect lenses with infrared rays, researchers at the Korea Electronics Technology Institute (KETI) has developed a detector capable of capturing signals sent by candid cameras when they transmit data using Wi-Fi, a wireless technology commonly used for the local area networking of devices and Internet access that allows nearby digital devices to exchange data by radio waves.

The detector transmits captured information in real-time to mobile phones or computers run by managers so that they can check it anytime, anywhere, and responds quickly. It is easy to carry and smaller than existing detectors, the institute said, adding that detectors would be installed in three toilets in a public park in Ilsan northwest of Seoul for a one-year test operation.

KETI president Kim Young-sam said that high-precision detection technology can be used for military and industrial security. "Radiofrequency technology, infrared technology, and image processing technology used in detectors are expected to have synergy effects as they can be applied to smart cities, drones, and advanced sensors."

Photographs taken in swimming pools, beaches, changing rooms and toilets have leaked despite a consistent crackdown. President Moon Jae-in has called for special measures to curb sex crimes of taking candid shots with hidden cameras. Police have cracked down on websites, online communities and uploaders accused of spreading candid pictures and illegally taken pictures and videos.

In March 2019, four men were accused of using tiny internet protocol (IP) cameras installed inside TV set-top boxes, hairdryer stands and electric outlets in 42 motel rooms in ten cities to run a subscription website showing the privacy of about quests, using high-quality cameras with lenses as small as one millimeter (0.03 inch) in diameter. Cameras were hooked onto wireless networks to relay video footage in real-time.