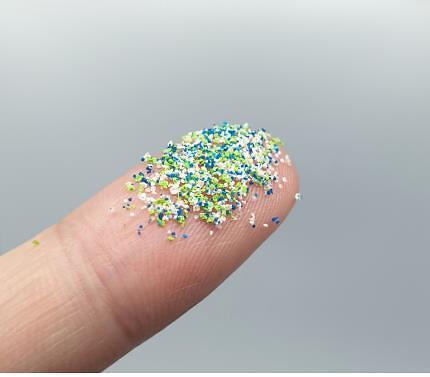 SEOUL -- Researchers have found a material made of chitosan, a sugar composite obtained from the exoskeleton of crustaceans including crab, lobster and prawn that can replace plastic microbeads used in cosmetics products. Plastic microbeads are not biodegradable. It takes more than 1,000 years for a plastic bead to break down in a natural environment.

When microbeads reach rivers, lakes and oceans, they are consumed by planktons and other water animals that mistake the bead for food. Eventually, microbeads affect the whole food pyramid as it moves up the food chain. Humans, the apex predator, also consume micro pallets dubbed "death balls," as they eat fish and other animals. South Korean cosmetics companies have voluntarily stopped using plastic microbeads in 2017.

The state-run Korea Research Institute of Chemical Technology (KRICT) said in a statement on October 13 that its research team has developed a biodegradable microbead material made of Chitosan. Up to 90 percent of chito-beads can be broken down in seawater in 30 days.

"This research will contribute to the development of a degradable high-performance facial wash microbead material," KRICT researcher Park Je-young was quoted as saying. Researchers found that chito-beads were up to 200 percent more effective than normal soap in cleaning waterproof cosmetics of the skin. The biodegradable beads were about 120 percent more effective than plastic beads.