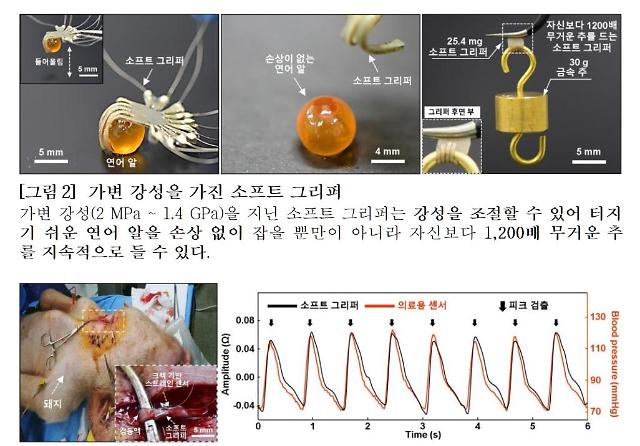 
SEOUL -- Researchers have developed a multifunctional soft gripper that can delicately manipulate soft objects like a snail egg about three millimeters in diameter. The hand-like robot capable of sensing biosignals including temperature and pressure on grasped objects can be used for monitoring medical diagnosis and treatment. Through a follow-up study, functions such as drug delivery will be added.

While ordinary robots are clad in hard-shell armor made of metal alloys or plastic, soft robots have durable and flexible skins that encase machine components. Because of their ability to squeeze into tight spots, soft robots are widely used for medical and rescue purposes. Some robots have human hand-like grippers, or manipulators, that can grasp and manipulate objects. However, an ordinary gripper cannot carry out delicate tasks such as grabbing a small, soft fish egg.

A joint team of researchers from universities and state research institutes in South Korea has developed a soft gripper robot made of shape memory polymer materials, silver nanowires and a crack-based strain sensor, the Ministry of Science and ICT said in a statement on October 14. The robot, about five millimeters wide, was able to softly grasp onto a snail egg and manipulate an object that weighs 30 grams, which is about 1,200 times heavier than the miniature robot hand.

"Conventional gripper robots can only sense the reaction of the grasped object. However, because the newly-developed gripper has the ability to sense and stimulate an object, it can be used for monitoring health signals in the medical sector," head researcher Han Seung-yong was quoted as saying.

The robot can sense biosignals and heat with manipulators. Researchers used the robot to wrap a snail egg and provide heat until it hatched. The robot's sensor measured the heart rate of a baby snail. The size of the baby snail's heart is about 400 micrometers in diameter.

Researchers also succeeded in using the robot to grab a pig's vein without damaging it to measure the animal's heart rate. "This was the world's first case for a soft robot to lift up a micrometer-sized organic object without damaging it to measure biosignals," the science ministry said, adding the research team will continue upgrading the robot to create a new monitoring platform that can safely carry human cell-unit organic objects and measure biosignals.