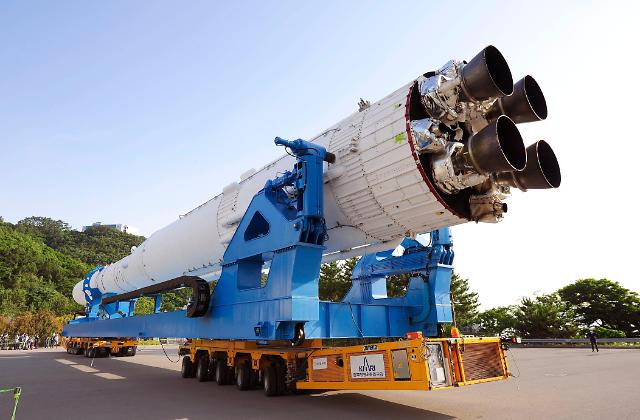 SEOUL -- To enhance global competitiveness, space scientists advocate a wise strategy to target niche markets at a time when reusable projectiles that can drastically reduce costs are emerging as a game-changer. As a latecomer in space competition, South Korea faces an important turning point in the development of space rockets, starting with the launch of a space rocket installed with home-grown liquid fuel engines.

"We will have to work hard to secure the reliability and ensure the safety of Nuri," Jang Tae-Seong, a satellite researcher at the state-run Korea Advanced Institute of Science & Technology (KAIST), said at a forum which was held a week ahead of the scheduled launch on October 21 of the Korea Space Launch Vehicle-2 (KSLV-2), known as "Nuri" capable of deploying 1.5-ton satellites into 600 to 800 kilometers (497 miles) of orbit.

If the first launch of Nuri, designed by the state-run Korea Aerospace Research Institute (KARI), is successful, South Korea would be the seventh country to develop a rocket capable of carrying more than one ton of payload after the United States, Russia, France, Japan, China and India, heralding a full-fledged start of South Korea's space program which followed almost 13 years of arduous work to develop original technologies with the initial help of Russian engineers.

South Korea's space program has seen slow progress as advanced countries were reluctant to transfer core technologies. Three space rockets have been launched but two fired in 2009 and 2010 failed to reach the earth's targeted orbit. The third one using Russian technology put a satellite into orbit in 2013. Some 1.96 trillion won ($1.68 billion) has been invested in the space program that began in 2010 to secure independent space transport capabilities.

"Even if Nuri succeeds in entering orbit, we cannot guarantee all subsequent successes. In order to secure reliability and technical stability, a repeated launch project is very important," Jang said, calling for efforts to secure the reliability and technical stability of homemade rockets and establish a business model targeting niche markets through weight-lightening and an increase in the power of engines.

Lim Jong-bin, a researcher and policymaker at South Korea's national space policy research center, said that with Nuri's first launch, South Korea would secure "a symbol of national power," strategic technologies, and the entire process of independent rocket development. "In space development, projectiles, in particular, are not easy to challenge unless economic capabilities, as well as national science technology, are added."

"Related technologies can be used for war, so technology transfer and sharing between countries are prohibited," said Lim from the Science and Technology Policy Institute (STEPI). Still, he said South Korea has a long way to go because Nuri is less competitive than foreign projectiles due to its small payload capacity and lack of reliability.

The launch of Nuri underlines efforts by the Seoul government to push for a policy shift to foster a civilian-led space industry. From 2022 to 2027, the government would spend some 680 billion won to launch four Nuri rockets. The goal is to create a self-sustaining industrial ecosystem and cultivate innovative companies like Space X, a U.S. aerospace company.

South Korea had no time to secure technologies related to a reusable launch system or large satellite capabilities, Lim said, adding a space industry ecosystem should be established to activate the development of technologies on small satellites by private space companies. "We should acquire technical capabilities in high-performance projectiles for space exploration, dramatically lower launch service costs and enhance competitiveness by linking a next program with the development of projectiles such as reusable projectiles."

The mid-term goal of South Korea's space program is to develop solid-propellant boosters, put a lot of small low-orbit satellites into orbit and raise the localization rate of high-tech space components for satellites and launchers. Liquid-propellant rockets offer more efficient and controllable alternatives, but solid rockets are used in military armament or as light launch vehicles because of their simplicity and reliability. Rockets using solid fuel are more economical to place small satellites.

Technology related to a solid propulsion engine and the launch of Nuri will be transferred to the private sector. "I believe that in liquid engine technology, we have caught up with up to 70 percent of developed countries," said Oh Seung-hyup, a KARI researcher in charge of developing a rocket propulsion system.