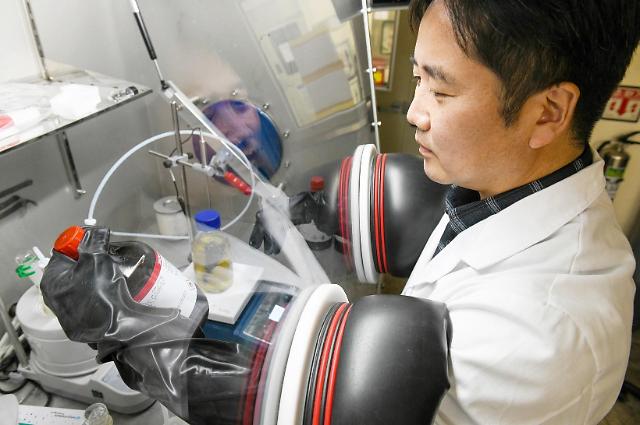 
SEOUL -- A government-supported research body in South Korea has transferred technology to a domestic company for the mass production of sulfide-based solid electrolytes for all-solid-state batteries at low prices. All-solid-state batteries are seen as a next-generation power source for electric vehicles as solid electrolytes are nonflammable and more stable. They can have a higher energy density than lithium-ion batteries.

"It is an achievement that can solve both the low price and 'mass production issues of solid electrolytes, which are the key to commercializing all-solid-state batteries," KERI researcher Ha Yoon-cheol said in a statement on October 25. "Through this technology transfer, solid electrolytes will be mass-produced, playing a leading role in the commercialization of all-solid-state batteries which are called dream batteries."

Lithium sulfide (Li2S) used for solid batteries is expensive and requires a lot of energy in production. Ha's research team has developed a method that can mass-produce sulfide-based solid electrolytes at low prices with a simple "one-pot" solution synthesis process. A one-pot synthesis improves the efficiency of a chemical reaction whereby a reactant is subjected to successive chemical reactions in just one reactor.

The research team has developed a method that co-precipitates lithium, sulfur, phosphorus, and halogen elements to produce solid electrolytes at the same level as the high-energy and high-cost method of using expensive lithium sulfide.

In July, the Electronics and Telecommunications Research Institute (ETRI) teamed up with the Daegu Gyeongbuk Institute of Science and Technology (DGIST) to develop a new electrode structure for an all-solid-state battery without using titanium disulfide (TiS2). The new structure features an active material made with highly compressed TiS2 and binders. The new structure can reach about 1.3 times higher in energy density than solid electrolytes.