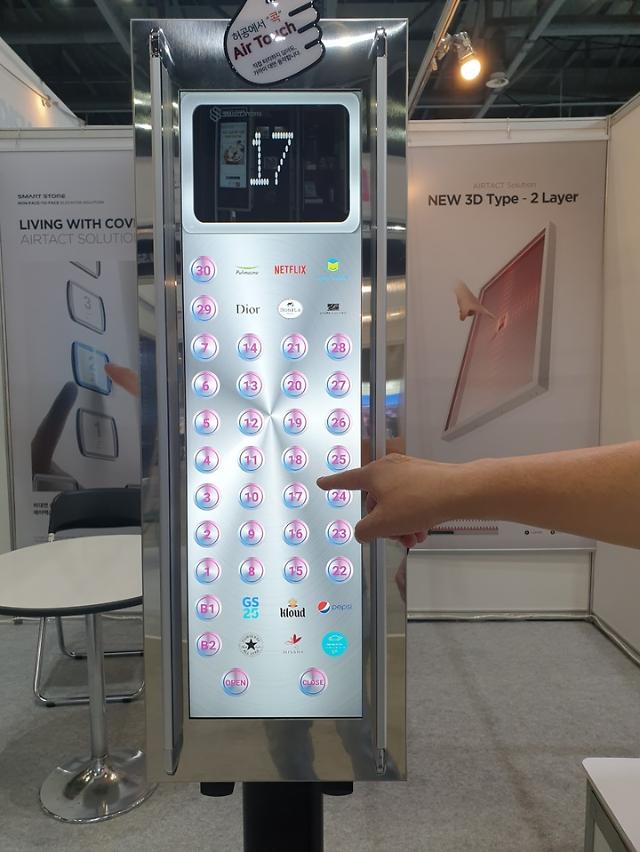 SEOUL -- Researchers from an aerospace university have developed a contactless elevator button sensor that detects three-dimensional hand movements. The sensor capable of detecting finger movements in the air was developed to reduce indirect contact between people inside an elevator. Medical researchers stress that the chance of being infected with a coronavirus by touching a contaminated surface, such as the face of an elevator button, is not very high but it is important to eliminate all possible disease infection routes to suppress an epidemic.

A coronavirus pandemic that hit South Korea in 2020 has called for the enhanced hygiene of public facilities. Antibacterial films and similar materials are widely used to cover elevator buttons, door handles and other objects that are frequently touched by many random people. The fear of coronavirus infection has triggered the spread of a contactless culture that prompted the fast adoption of antibacterial materials and non-face-to-face services such as digital kiosks used at restaurants and coffee shops.

The Gyeonggi Provincial Government said in a statement on October 25 that the world's first contactless elevator button sensor, developed by Korea Aerospace University, can detect three-dimensional (3D) movement information such as the direction and speed of hand movements. It takes less than five milliseconds for the sensor to recognize hand movements. Because there is no physical contact involved, maintenance costs can be also reduced.

"It is very meaningful that contactless technology has been developed when non-face-to-face and contactless lifestyles have become the new normal due to the prolonged coronavirus pandemic," Gyeonggi Province Assistant Governor for Economy Ryu Gwang-yeol was quoted as saying. Gyeonggi Province said the city will continue to support companies to increase sales of the new technology.