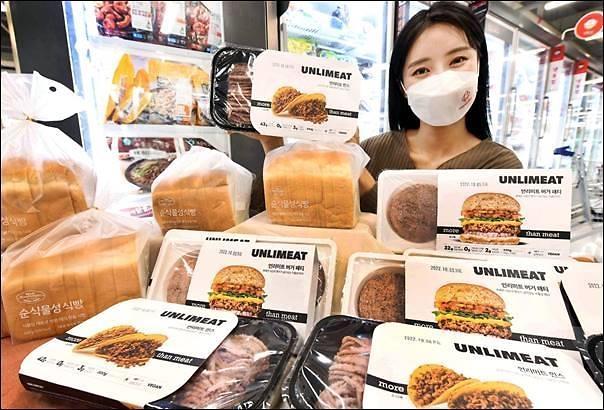 SEOUL -- South Korea's megastore franchise Homeplus will attract vegans by opening a special shopping area called "Vegan Zone." Vegan products such as bread made with plant-based ingredients and alternative meat, also known as artificial meat, will be sold in the area.

Homeplus said in a statement on October 26 that various vegan-friendly products including alternative meat and vegan bread will be sold through the vegan zone. Consumers can buy four types of alternative products made mainly with brown rice, oats and nuts. The alternative meat products mimic the taste and texture of animal products. The vegan bread is made only with vegetable ingredients without using milk, eggs and butter.

"We will continue to expand the product lineup and release new vegan products such as cheese, meatballs and barbecued meat," Homeplus official Baek Soo-bin was quoted as saying.

According to the Korea Vegetarian Union, the number of vegans in South Korea sharply increased from about 150,000 in 2008 to some 1.5 million in 2018. The union's data showed that there were about 500 vegan restaurants in 2019. The spread of vegan culture is related to the trend of selecting food based on personal values and beliefs among millennials and Gen Z. The prolonged coronavirus pandemic has also triggered the interest in the environment and health.