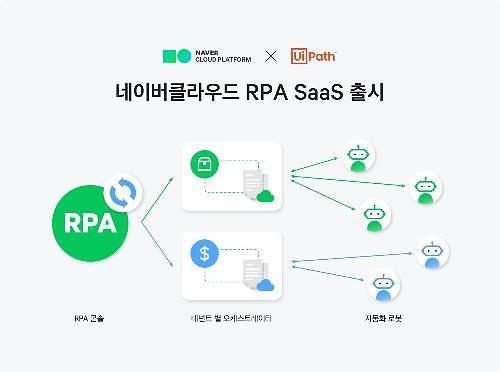 A robotic process automation (RPA) system is frequently used to take care of repetitive and standardized chores so that human employees can focus on creative work. In September 2020, an RPA system was adopted by Songpa District, a southeastern district of Seoul, to create reports for civil complaints and check complaints uploaded onto the district government's website.

Naver Cloud said in a statement on November 1 that the company released the RPA solution made by UiPath, an American global software company, as SaaS. SaaS is a software delivery model in which a cloud-based software application is licensed to a user. SaaS providers deliver and maintain applications using cloud services. Multiple users can have access to the same software, and users do not have to worry about server maintenance.

Using its cloud computing infrastructure, Naver Cloud's IPA service can simulate "Orchestrator," a tool that operates the automation process in any environment including robot registration and schedule management without building complex infrastructure or installing separate software.
© Aju Business Daily & www.ajunews.com Copyright: All materials on this site may not be reproduced, distributed, transmitted, displayed, published or broadcast without the authorization from the Aju News Corporation.