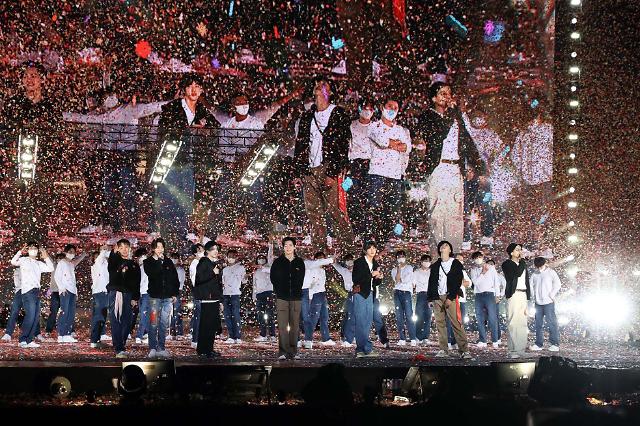 
SEOUL -- Major entertainment companies in South Korea are paying attention to new technologies such as metaverse and non-fungible tokens that could utilize the growing worldwide influence of K-pop artists and their intellectual property to create new and stable sources of income. Hybe, the agency of K-pop wonder BTS with a powerful base of fans in many countries, is no exception.

A non-fungible token (NFT) is a unit of data stored on a blockchain network of interlinked virtual ledgers. Each NFT is certified by a blockchain as a unique digital asset that is not interchangeable. NFT can be used to represent different types of digital media such as video clips and digital files. The metaverse is a digital world that offers firsthand experiences, created by the convergence of physical reality and virtual spaces.

"Considering Hybe's recent investment destination and strategic direction, we believe that new projects related to metaverse and NFT are likely to begin," NH Investment & Securities analyst Lee Hwa-jung said on November 2, adding that Hybe's metaverse and NFT businesses are expected to achieve success thanks to the unique culture of fandom. "(Hybe) will be able to gain strong growth engines by turning its fandom platform into metaverse and utilizing the intellectual property of artists as NFT."

The introduction of new technologies was seen as an inevitable choice as a COVID-19 pandemic caused a slump in South Korea's music industry. In July, JYP Entertainment joined hands with Dunamu, a blockchain company, to launch an NFT platform business utilizing the intellectual property of artists. SM Entertainment has proposed the creation of a metaverse platform where various types of independent IPs such as music, music video, and performance are connected to each other.

Compared to domestic rivals, Hybe has taken a relatively inconspicuous step since April, when its American subsidiary acquired Ithaca Holdings, a Los Angeles-based investment holding company that controls the label of Justin Bieber. The acquisition came two weeks after Big Hit Entertainment founded by Bang Si-hyuk changed its name to Hybe to herald a new start.