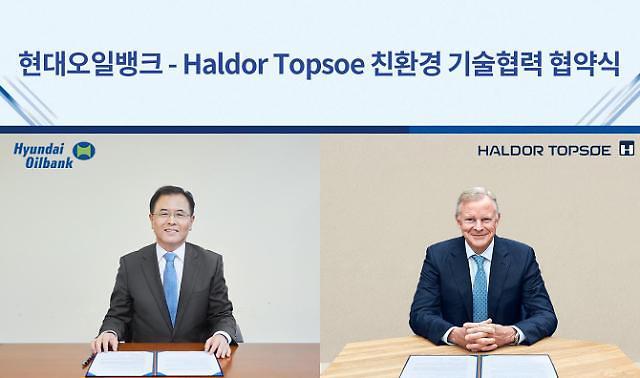 
SEOUL -- Hyundai Oilbank partnered with a Danish company specializing in carbon reduction technologies to push for the development of renewable synthetic fuels, known as e-fuels, which are carbon neutral and can allow vehicles, airplanes and ships to operate in a climate-friendly manner without releasing additional carbon dioxide.

The production of e-fuels is based on the extraction of hydrogen by means of an electrolysis process that breaks down water into hydrogen and oxygen. Hydrogen is combined with CO2 extracted from the air and converted into a liquid energy carrier.

Hyundai Oilbank said that it has signed a memorandum of understanding with Haldor Topsoe of Denmark to cooperate in developing e-fuels that can utilize the existing gas station infrastructure without building new facilities. The Danish company has advanced technology in separating hydrogen from blue and green ammonia.

"We will cooperate in technology in various eco-friendly fields such as biofuels and waste plastic resources in addition to hydrogen and carbon dioxide utilization, including fuels," said Hyundai Oilbank CEO Kang Dal-ho. As part of a broad roadmap unveiled by its parent group to establish a hydrogen value chain by 2030, Hyundai Oilbank will produce blue hydrogen and use it for desulfurization facilities or sell it as fuel for vehicles and power generation.