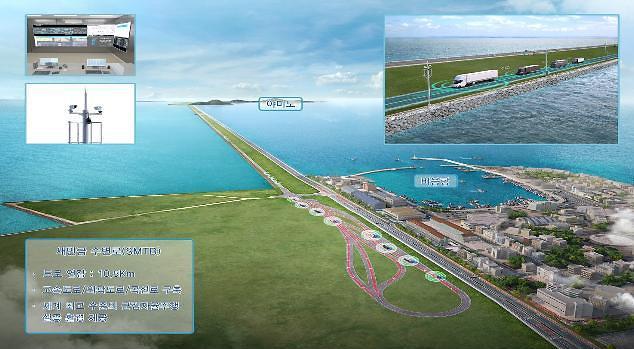 SEOUL -- South Korea has broken the ground for the construction of a testbed area in reclaimed land near the southwestern port city of Gunsan. The testbed will be used for the research and development of high-speed autonomous driving technologies. Self-driving cars with level 3 autonomous drive technologies or higher levels will be developed at the test area.

Level 3 autonomous cars are capable of detecting their environment and making decisions such as speeding past a slow-moving vehicle or evading an obstacle ahead. However, a driver has to be present at all times to intervene and take control if emergency situations such as road accidents or machine malfunctions take place.

North Jeolla Province said that some 20 billion won ($16.7 million) will be invested to construct autonomous vehicle testing grounds in reclaimed land created by a seawall that stretches 33 kilometers (20 miles) along the coast in Saemangeum. The seawall built in 2010 has been certified by Guinness World Records as the world's longest man-made sea barrier which created an area of about 400 square kilometers and a freshwater reservoir.

A 21-kilometer-long test road, as well as safety and analytic facilities, will be built in Saemangum by the end of 2022. The testbed will later support autonomous levels 4 and 5, which do not require human intervention. "We plan to build an additional large-size testbed to upgrade South Korea's autonomous vehicle ecosystem and create new job opportunities," North Jeolla governor Song Ha-jin said in a statement on November 5.