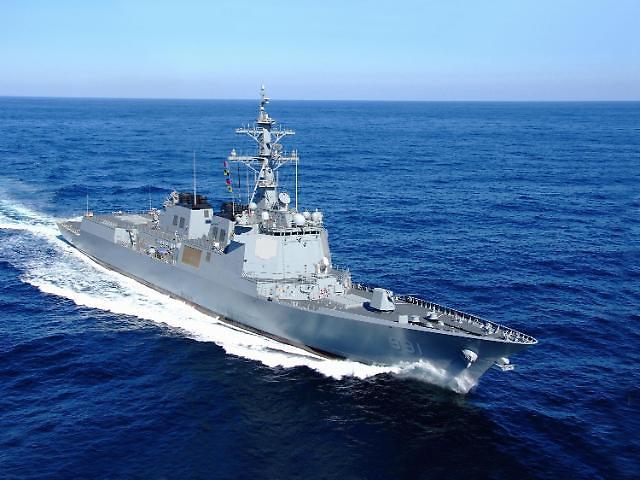 Hyundai Heavy Industries (HHI) said the new Aegis destroyer would be delivered in 2026 under a deal with the Defense Acquisition Program Administration (DAPA), a state arms procurement agency. It would be the fourth Aegis ship to be built at the world's largest shipyard in the southeastern port city of Ulsan.

South Korea's KDX-III Batch II project calls for the construction of three 8,100-ton Aegis destroyers which are 170 meters long and can sail at a speed of up to 30 knots, or 55 kilometers per hour. HHI would build the lead ship for delivery in November 2024. Along with tracking and other advanced equipment, the KDX-III Batch II ship will be installed with a fuel-saving auxiliary propulsion system consisting of two 1.7 megawatts-class motors.

"With our know-how and technology accumulated so far, we will contribute to the construction of a smart navy by building the highest-quality Aegis ship," HHI's special vessel unit head Nam Sang-hoon said in a statement on November 9.

South Korea's KDX program calls for the construction of three classes of destroyers, starting with a 3,800-ton vessel commissioned in 1998. So far, 12 destroyers have been built, including three KDX-III Batch I Aegis ships armed with Hyunmoo-3C cruise missiles with a range of up to 1,000 kilometers. HHI built the lead ship of the 7,600-ton Batch I Aegis ship in 2007 and the third one in 2011.

Separately, South Korea will build six KDDX-class (KDX-IV) stealthy destroyers by 2030. The 6,000-ton "mini Aegis" will have cruise missiles, advanced sensors, a missile defense system and stealth characteristics, all built with pure domestic technologies. They will use a new system that improves stealth capabilities, along with multifunction radars to detect missiles, aircraft and the surface of the sea at the same time.