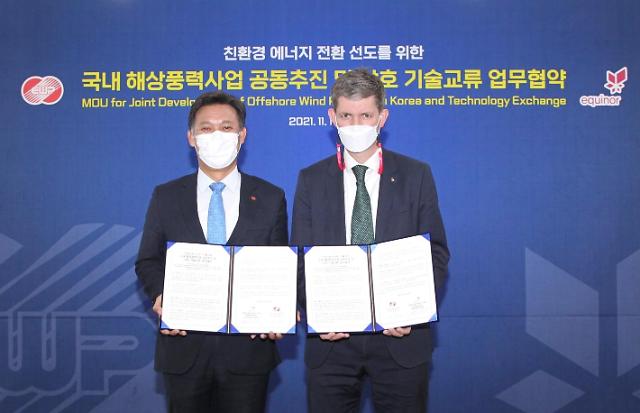 Jacques-Etienne Michel (R), managing director of Equinor South Korea, and Korea East-West Power CEO Kim Yung-moon (L) pose for a picture after they signed a business cooperation agreement in the southeastern port city of Ulsan on November 17. [Courtesy of Equinor]

SEOUL -- Equinor, a Norwegian state-owned multinational energy company, tied up with Korea East-West Power, a public power generation company, to cooperate for 3.0 gigawatts of offshore wind power projects in South Korea. The partnership underlines Equinor's strategy to take a leading role in developing a pipeline of offshore wind projects in a country that is actively pushing for a green energy campaign to expand the use of renewable energy.

Under a memorandum of understanding signed on November 17 at the headquarters of Korea East-West Power (EWP) in the southeastern industrial port city of Ulsan, the two companies agreed to jointly promote offshore wind power development projects in South Korea and actively engage in technology exchanges.

They would cooperate in the joint development of business models through their development know-how and technology exchanges. A technical cooperation consultative body will be formed in December to establish an operation maintenance strategy optimized for offshore wind power generation in South Korea, which aims to expand the capacity of renewable energy up to 60 GW by 2034. Some 12GW will come from offshore wind by 2030.

"South Korea aims to become one of the leading global markets for offshore wind in the next decade," Equinor's executive vice president Pal Eitrheim said in a statement. "We see a big potential to leverage our experience in building a new industry together with Korea's world-class supply chain," Eitrheim said. Equinor hopes to develop the first commercial floating offshore wind farm in South Korea.