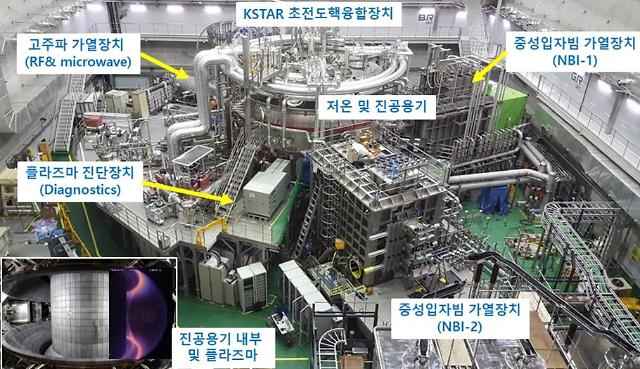 
SEOUL -- KSTAR, a magnetic fusion device run by South Korean researchers to study aspects of magnetic fusion energy, broke its own record in a super-hot plasma field to maintain a plasma center ion temperature of 100 million degrees Celsius for 30 seconds. The previous record set in 2020 was 20 seconds.

The state-run Korea Institute of Fusion Energy (KFE) attributed its achievement to the better stability of an internal transport barrier mode for the operation of a nuclear fusion reactor by improving KSTAR's improved heating performance and securing optimal magnetic field conditions.

To extend time to 300 seconds, the institute would use a tungsten divertor to improve power supplies and suppress rising inner wall temperature. The divertor is a component that discharges impurities such as helium to the outside of a nuclear fusion reactor. High-performance plasma operations require tungsten instead of carbon.

"We will make efforts to make South Korea a real energy powerhouse by securing core nuclear fusion technologies in good times," KFE head Yoo Suk-jae said in a statement on November 22. The institute would run a demonstration reactor that produces real electricity with fusion energy produced by KSTAR, a research tokamak to feature fully superconducting magnets.

Fusion power has long been spotlighted as a safe next-generation power source capable of reducing radioactivity, but it's extremely difficult to produce a state of controlled fusion. Seven countries including South Korea, the United States, China and EU members have been involved in the International Thermonuclear Experimental Reactor (ITER) project to build an experimental fusion reactor in Cadarache, France.

Plasma experiments will begin in 2025 and full deuterium-tritium fusion experiments in 2035.  If the ITER experiment is successful, it could provide mankind with a limitless energy source.