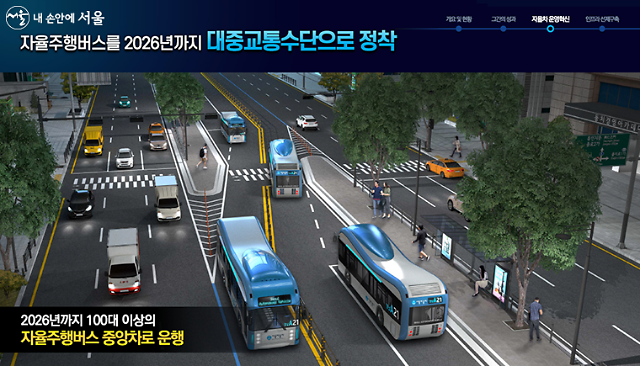 SEOUL -- Through a 148.7 billion won ($125 million) project, Seoul will carry out its five-year plan to build safe autonomous driving infrastructure throughout the city. While the city has focused on the establishment and demonstration of self-driving technology infrastructure during the last few years, Seoul will develop and demonstrate various autonomous transportation services as the next step towards the full adoption of self-driving technologies that will improve citizens' lives.

Unlike autonomous levels 1, 2, and 3 that assist human drivers to conveniently reach their destinations, a level 4 self-driving vehicle does not require a driver. It navigates around places by communicating with on-road structures such as traffic lights and pedestrian crossings. A human driver is only necessary in case of an emergency. The level 4 autonomous driving will be fully commercialized in 2027 in South Korea.

At a press briefing held on November 24, Seoul said that the city government plans to adopt more than 300 autonomous vehicles and related services by 2026. Autonomous driving infrastructure that provides real-time traffic signal information on every road with more than two lanes will be built for safe operation. Seoul will also develop a detailed road map and other safety platforms to prevent unexpected situations and reduce risks on the road.

Starting November 2021, Seoul will gradually increase the number of pilot zones for autonomous vehicles. The pilot zones are areas where various commercial autonomous vehicle-related services such as car-hailing services are demonstrated. Sangam, a western digital technology district designated as Seoul's first pilot zone, will house six self-driving vehicles designed for car-hailing services. Citizens can reserve vehicles using their smartphones. After test-operating the service for free for a month, passengers will be required to pay for the service starting January 2022. Seoul eventually plans to operate more than 50 self-driving vehicles in Sangam's pilot zone.

In 2022, self-driving buses will be operated near Cheonggyecheon, a stream that flows through the heart of Seoul. At least 10 driverless taxis called "robotaxis" will be operated in Gangnam, South Korea's center of finance and fashion trends in early 2022. The number of driverless taxis will be increased to more than 100 by 2026. Since September 2020, Seoul has built a cooperative intelligent transport system (C-ITS) that provides real-time information such as traffic conditions so that individual vehicles could share data and prevent traffic accidents.

To demonstrate self-driving buses in 2023, the city will create a 9.7 kilometers-long autonomous bus route that connects four city districts with heavy foot traffic during the late-night time when subway trains stop running.

"By expanding the autonomous driving infrastructure across Seoul, we will create the top 5 autonomous driving leading city by 2026," Seoul Mayor Oh Se-hoon was quoted as saying. According to Seoul, the five-year plan is meaningful in terms of providing freedom of movement for all citizens, regardless of age or gender, whether they have a driver's license or not.
© Aju Business Daily & www.ajunews.com Copyright: All materials on this site may not be reproduced, distributed, transmitted, displayed, published or broadcast without the authorization from the Aju News Corporation.