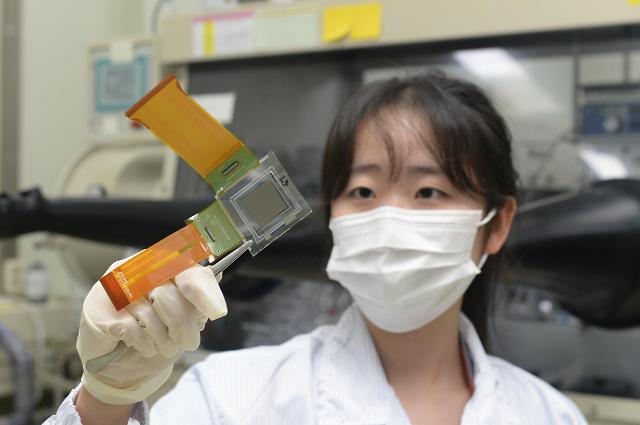 SEOUL -- South Korean researchers have collaborated with a domestic electronic parts maker to develop a high-performance fingerprint sensor using organic photodiodes. The new sensor can be produced in a film shape so that it can be hidden underneath a smartphone's display to read a fingerprint from any part of the screen. Currently, smartphones read biometrics only from the area where hidden sensors are placed.

Biometrics refers to measurements related to unique human characteristics such as fingerprint and iris patterns. Many personal authentication systems use various kinds of biometrics for verification. Fingerprints are the most commonly used form of biometrics. Ordinary fingerprint silicon sensor modules are bulky because they need to be equipped with various color filters to read and analyze different wavelengths of light.

The Electronics and Telecommunications Research Institute (ETRI) has teamed up with Pohang University of Science and Technology (POSTECH) and CLAP, a domestic electronic parts maker, to create a light photodiode sensor using organic substances doped with bis(fluorophenyl azide) additives. Because organic materials have higher light-absorbing characteristics than silicon, organic sensors can be created in a thinner and smaller size.

The sensor consists of three photoactive layers made with molybdenum, oxides and gold. The structure was designed to absorb more light than conventional sensors. ETRI predicted early commercialization as it can be manufactured with easily accessible materials and existing production facilities.

"We have developed the new sensor with commercialization in mind so that it can be actually be used in everyday lives," ETRI head researcher Park Young-sam was quoted as saying. He said the high-performance film-type fingerprint sensor can be applied to smartphones, laptops and automated teller machines (ATMs) for safe biometrics authentication.