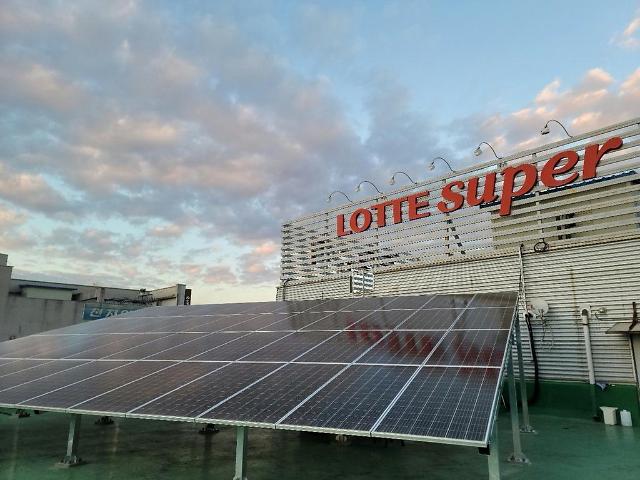 SEOUL -- Lotte Super, a supermarket wing of South Korea's retail giant Lotte Group, has built 11 solar power plants on the rooftop of its stores and logistics center to go green and achieve carbon neutrality. The power plants that generate about 1,360 megawatt-hours per year can power some 1,360,000 households.

Lotte Super said in a statement on December 1 that the company has built solar power plants on rooftops of affiliated stores and a logistics center. The total size of the rooftop power plant is 5,100 square meters, which is about the size of 20 tennis courts. The company's stores and logistics centers across the country use a total of about 130,000 megawatt-hours of electricity every year. Lotte Super predicted that about 10 percent of total consumed electricity can be replaced with renewable energy generated using rooftop solar panels.

South Korea has focused on turning various idle spaces into eco-friendly power generation venues to reduce carbon emissions. In October 2021, a 1.3 megawatt-class solar power plant was built on the rooftop of the state nuclear power plant operator's headquarters building. The rooftop power plant can generate electricity that can power about 1,300 households.

Hanwha Q Cells, the solar cell-making wing of South Korea's Hanwha Group, is leading a 96 billion won ($86 million) project to build 60 megawatt-class solar power facilities on factory roofs and idle spaces in the southern industrial city of Pohang by partnering with Korea East-West Power, a state power generation company.
© Aju Business Daily & www.ajunews.com Copyright: All materials on this site may not be reproduced, distributed, transmitted, displayed, published or broadcast without the authorization from the Aju News Corporation.