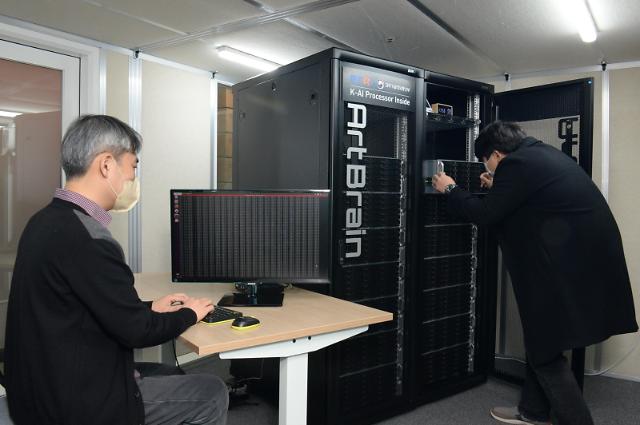 SEOUL -- Using a high-performance artificial intelligence (AI) chip, South Korean researchers have established a system that can accelerate the process of learning data and yielding results. The system capable of performing five thousand trillion operations per second is ideal for autonomous vehicles and AI servers because its chipset is about the size of a coin.

For AI's improved thinking, the Electronics and Telecommunications Research Institute (ETRI) has developed an NPU called "AB9" in 2020. AB9 is a low-power coin-sized chip that can perform 40 trillion operations per second. NPU boards are designed to replace GPUs. An ordinary server node module can house up to seven GPUs.

ETRI said in a statement on December 2 that the institute has developed a rack-type AI system that consists of eight server node modules. Each server node houses up to 20 NPU boards. The system is optimized for high-performance servers, cloud servers, autonomous vehicles and AI applications designed to recognize people and objects in real-time.

Currently, ETRI's AI system is being used at Incheon International Airport, South Korea's main gateway, for a real-time facial recognition security system. "We have succeeded in boosting our global competitiveness in the AI technology sector by developing an NPU board with an AI chip, an NPU server system and related software," ETRI AI processor development team director Han Jin-ho was quoted as saying.