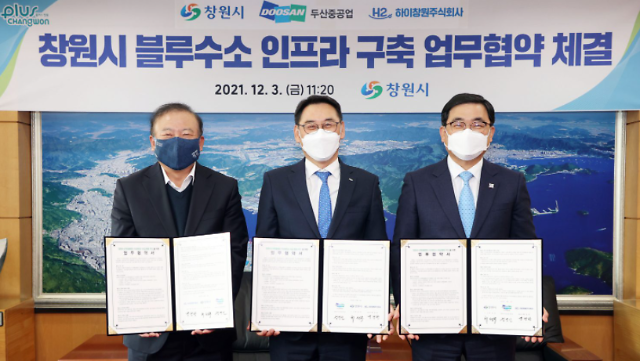 SEOUL -- Doosan Heavy Industries & Construction will lead a project to apply carbon capture utilization technology to South Korea's first hydrogen liquefaction plant that will be completed by 2023 to produce five tons of blue hydrogen and 48 tons of liquefied carbon dioxide a day for use at hydrogen charging stations and gas producers.

Doosan Heavy said that the company signed a business agreement with Hychangwon, a hydrogen-related company, and the Changwon city government to apply high-efficiency carbon capture, utilization and storage (CCUS) technology to the plant, which broke the ground in July 2021. Doosan Heavy is in charge of design, production, construction and operation.

"It is meaningful that we can carry out a project to build South Korea's first blue hydrogen plant with Changwon City and Hychangwon. Through this agreement, we will try to build the foundation for eco-friendly blue hydrogen production and promote the region's hydrogen industry," Doosan Heavy CEO Jung Yeon-in said in a statement on December 3.

South Korea has adopted hydrogen fuel cells and electric batteries as mainstream fuel in the future. The advantage of liquefied hydrogen is its high density compared to compressed gas, which means that more energy can be contained in a given volume for easy transportation. Liquid hydrogen is essential in a government campaign to expand the use of fuel cells for automobiles and the production of electricity. The liquefaction of hydrogen requires cooling to a temperature of minus 253 degrees Celsius and subsequent storage in cryogenic containers.