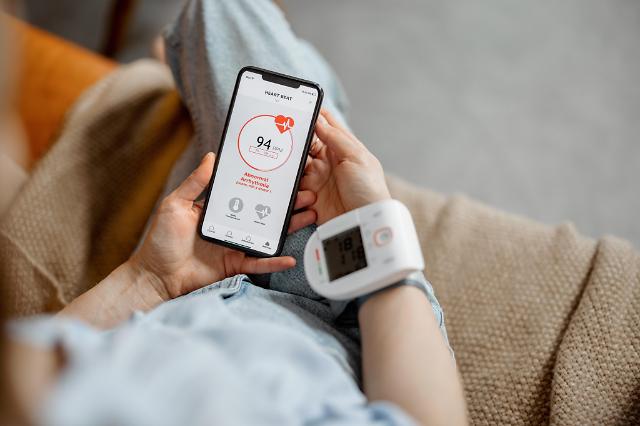 SEOUL -- An artificial intelligence-based healthcare service will be test operated in the southern port city of Busan to look after some 1,200 vulnerable old people. Personalized management services will be offered based on health data collected by smartphones linked to a smart blood pressure gauge and wearable activity monitor.

To prevent the rapidly increasing number of lonely deaths, which skyrocketed from 68 in 2011 to 1,145 in 2019, South Korea has been utilizing internet of things (IoT) sensors. Some 75,000 IoT sensors capable of detecting temperature, humidity and movements in real-time were deployed to the homes of single elderlies in Seoul as of March 2020.

Busan will demonstrate the health management service for elderlies using artificial intelligence (AI) and IoT technology in four districts as a state project, the southern port city said on December 6. Various health monitoring devices such as a wearable activity monitor, scale, blood pressure gauge, and AI speaker will be connected to smartphones to help some 1,200 residents aged 65 or older who need chronic disease or dietary management. After analyzing health information, medical experts will provide personalized management services once a week.

As of September 2021, Busan with a population of some 3.4 million became a super-aging society where the number of senior citizens aged 65 or older accounted for more than 20 percent of the total population. Busan is also preparing for the operation of three medical buses equipped with medical devices to offer medical checks for elderlies by visiting public facilities such as daycare centers. The city will also assign nutritionists and medical experts to provide special healthcare programs for old people.
© Aju Business Daily & www.ajunews.com Copyright: All materials on this site may not be reproduced, distributed, transmitted, displayed, published or broadcast without the authorization from the Aju News Corporation.