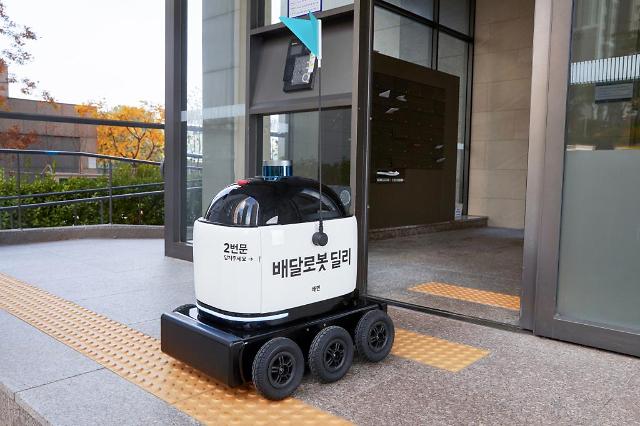 Starting with a one-month demonstration of "Dilly," a six-wheeled food delivery robot, at a university campus in eastern Seoul in December 2019, Baedal Minjok has developed and test operated a handful of delivery robots that are capable of carrying food and drinks. Some Dilly models communicate with elevators so that they can move up and down floors.

Dilly was put to an actual outdoor food delivery service at an apartment complex in Suwon in August 2020. The robot carried food from a nearby restaurant to the entrance of an apartment building where customers are waiting. Dilly is capable of autonomously traveling through the shortest route from a restaurant to its destination.

Woowa Brothers, the operator of Baedal Minjok, said in a statement on December 15 that the company started the door-to-door delivery service using Dilly in the apartment complex in Suwon. The robot was given the ability to communicate with the apartment's home internet of things (IoT) system to gain access to buildings' security entrance doors. Dilly will notify the customer when it arrives at the doorstep of the customer's home.

"We think our robot delivery service will create new demands from restaurant owners because Dilly is ideal for delivering food to nearby locations and building complexes. Human deliverymen do not favor such delivery orders," Baedal Minjok's robot business director Kim Yo-seob was quoted as saying.

Deliverymen using motorcycles favor long-distance delivery calls because they get paid more if they travel long distances. Apartments and building complexes are not favored because it takes longer for them to use the stairs or elevators to deliver food than to visit homes located on the second floor of a small roadside building.

The food delivery service operator said Dilly has completed about 200 door-to-door delivery runs and each delivery run took an average of about 20 minutes. There were no safety accidents involving pedestrians, Baedal Minjok said. Currently, Dilly is being operated inside an apartment complex which is a controlled environment with a control tower. Baedal Minjok said that the company plans to expand the areas of operation to nearby parks and other controlled environments.